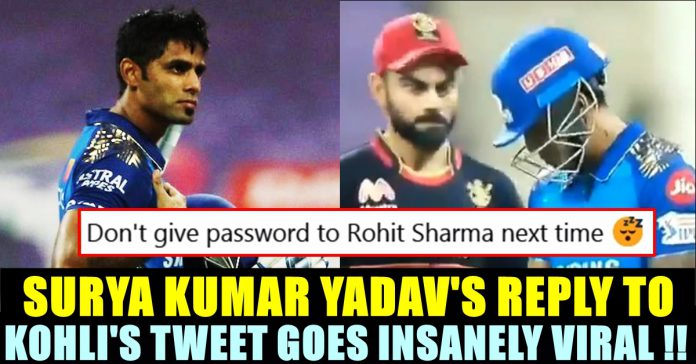 Surya Kumar Yadav’s reply to a post uploaded by national captain Kohli goes insanely viral among the twitter users with mixed reactions. The duo’s face off in an IPL match grabbed the attention of cricket fans who believed that the Mumbai Indians’ batsman giving it back to the Royal Challengers Bengaluru’s captain for sledging him and for not considering him for the upcoming Australia tour.

Kohli who is in Australia with the rest of Indian squad, uploaded a 20 seconds long video in his official twitter account which showed him practicing for the upcoming test match against Australia. “Love test cricket practice sessions” his caption for the post read.

This post of the cricketer garnered wide reach and enormous number of reactions from most of his 4 crore followers. Meanwhile, Surya Kumar Yadav, dropped a comment for the post praising Kohli. He who expressed his admiration towards the batting of captain Kohli, wrote “Energy, Sound, can’t wait to watch Domination #theBrand” as his comment.

This comment from Surya caused various kind of reactions from the users of the micro blogging social media site. Referring to an alleged twitter activity of Surya through which he reportedly liked a meme against Virat Kohli, a Virat fan wrote “Don’t give password to Rohit Sharma next time” whereas another one said “Wasn’t needed bro, Rohit from Borivali is angry at you”

Wasn't needed bro, Rohit from Borivali is angry at you😡

Dont get influenced by this social media. be patient and keep calm. you definately will get a chance to shine in indian jersey.

Virat to you this time 😂😂 pic.twitter.com/mPa4HYNXq1

Oh no, this guy is really scared now😣. Don't worry bro, Kohli has a big heart also he doesn't give a fcuk about social media reactions. Next series you will surely be part of ICT.

@surya_14kumar If you think you are bad @imVkohli is your Dad 🤙🤙
Don't mess with him ❤️ pic.twitter.com/3GZBPEFzgD

We know SKY you're Viratian

All the best @surya_14kumar U will be in Team India.

SKY bro, I know you were pure and king Kohli fan. Please don't let Rohit spoil your mind. He is a poison.

In a league match between RCB and MI, during the end of 13th over, Surya tried to hit Dale Steyn at the extra cover but the ball was fielded by Kohli. Since, it was the end of the over, Kohli walked towards the crease with the ball and Surya stood there with a deadpan expression on his face staring at Kohli. Both the players starred at each other before Surya moved on with the bat.

However, it has been discovered that an earlier incident that took place during the end of the 10th over caused the rift. When Virat fielded the ball played by Yadav, the Indian captain threw it towards the Mumbai Indian with a frustrated body language. He even said something while throwing the ball at the 30 year old.

Previous articleFans Trolling “Mookuthi Amman” For This Bizarre Reason !!
Next article“I Will Work With You Soon” – Vijay Devarakonda After Watching “Soorarai Pottru”