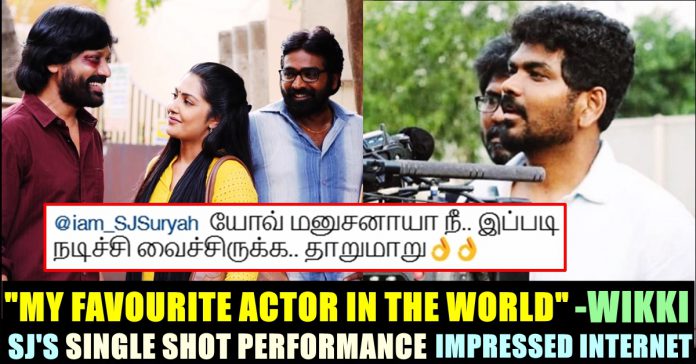 Karthick Subbaraj’s Iraivi celebrated its 4th year anniversary on 3rd June. The third directorial of the filmmaker is based on a short novel of writer Sujatha. In a way of celebrating the special day, Karthik Subbaraj uploaded an unseen raw footage of a single shot acted by SJ Suryah towards the climax in the movie.

In that scene, After killing Vijay Sethupathi to avenge him for Bobby Simha’s death which was caused by him, SJ Suryah calls his wife and pretends like a drunk to make her hate him as he is going to be jailed for murder charge. SJ Suryah, through his dialogues would have depicted how men are committing stupid blunders by thinking that they are dominant sex. The way he performed the scene naturally without any prompts for continuous 4 minutes proved how refined S J Suryah is as an actor.

#4YearsofIRAIVI – Very close to heart film to me & the Cast n Crew.

Many Internet users including director Vignesh Shivan who is known for making “Naanum Rowdy Thaan” impressed with what SJ Suryah pulled off 4 years ago. “A Star of an Actor !!! Everytime surprises wit his performance! One of my Favourite actors in the world SJ Surya sir :)) We need to see more of you soon sir” Vignesh’s tweet read.

A Star of an Actor !!! Everytime surprises wit his performance! One of my Favourite actors in the world @iam_SJSuryah sir :)) 😇😌😍🤩🥳
We need to see more of you soon sir 😇😇 waiting 🙂🙂 https://t.co/QytSyzYnvO

#iravi #4YearsofIRAIVI What an amazing film . Repeat watch movie I would say.

Hit like if you felt @iam_SJSuryah deserved national award for his performance.. He lived a drunkard's life in the movie so perfectly .

Comment your views on this performance from the actor !!