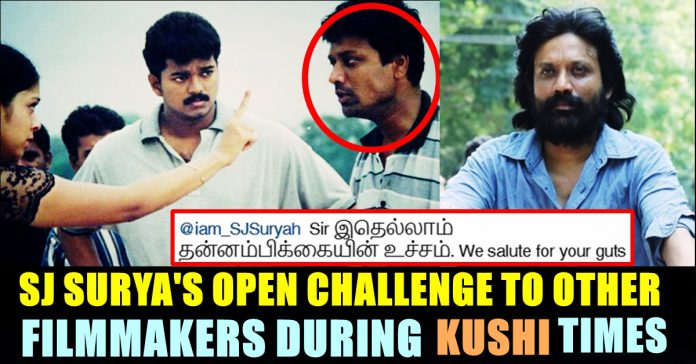 Surya made his directorial debut with Vaali in 1999 whose success catapulted him to stardom. His other notable films include Kushi, New, Anbe Aaruyire and Isai. He made his acting debut with New and went on to act in films like Kalvanin Kadhali, Thirumagan, Vyabari and has also worked as Antagonist in Spyder and Mersal.

He is the director who gave the career break to both the top rivals of Tamil cinema Ajith Kumar and Vijay. Now the director is busy in acting for other directors. Last seen in a fantasy comedy Monster, Surya’s “Iravakaalam” is waiting for its release. Apart from that he is also acting in a fantasy movie “Bommai”.

Meanwhile an interesting fact about the filmmaker during his initial stage of the career has surfaced in Internet. Nowadays in Tamil film industry, the number of controversies regarding plagiarism is way too high. Starting from Gopi Nainar accusing director A.R Murugadoss for stealing his story of Kaththi to Assistant director KP Selvah filing case against Atlee for stealing his story in “Bigil”, Kollywood faced a lot of plagiarism controversies in recent times.

Now a video of two experienced movie journalists who are known for their youtube channel Valaipechu has shared an incident about director SJ Surya’s self confidence in his filmmaking skills. They are saying that the filmmaker has revealed the climax of “Kushi” in the very first scene and engaged the audience with his sole screenplay.

Talking about stories getting leaked in film industry, one of the journalist says that it could not be avoided if any one from the crew walks out, there are lot of chances for a story to get leaked. “It is the maker’s responsibility to not let his story leak. Apart from story, the screenplay of a movie is important. For instance if we take SJ Surya, he narrated the entire story of Kushi during its press meet and openly challenged to steal if anyone wants. He believed in his screenplay skill.” they said.

On seeing this video, actor/director SJ Surya who got mentioned in this tweet, shared the video and confirmed the news by himself. He even thanked the journalists for appreciating him. Check out his tweet here :

On seeing this video, many users of online requested him to make a comeback as filmmaker in Tamil cinema. Few requested for a sequel of Kushi as well. Check out some of their reactions here :

@iam_SJSuryah Any possible kushi 2.
5 or 10min watching that film at everyday.

What do you think on the level of self confidence of the filmmaker?? Comment your views below !!