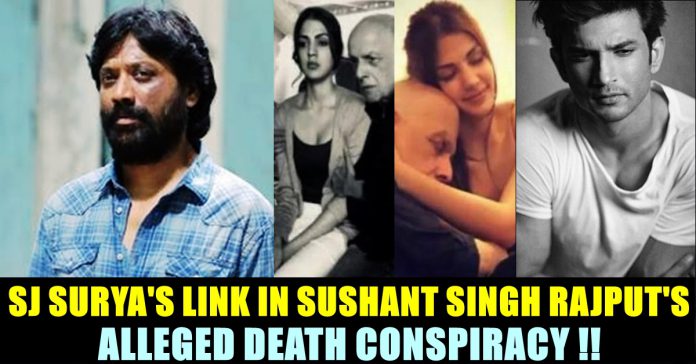 Amidst all the controversies surrounded by Bollywood young sensation Sushant Singh Rajput’s death, a twitter user compared the alleged conspiracy with one of director SJ Surya’s film. The tweet grabbed the attention of the filmmaker and he shared it as well.

In “Isai” movie, Vetri selvan (Sathyaraj), an aging music director who lost his market would trap A.K Shiva (SJ Surya), a successful music director with his ploys. Shiva is the one who assisted Vetriselvan once and gained fame by introducing new techniques. Due to his works and modernity his music possesses, he becomes the most sought after musician and overtakes Vetriselvan. Unable to overcome the trauma, Vetriselvan makes plans to destroy Shiva’s career. He would hire a young girl named as “Jenny” to lure Shiva and to disturb his peace of mind in order to distract him from concentrating in his works.

The news of Rhea Chakraborty, girlfriend of Sushant Singh Rajput being accused of “abetment to suicide” by the father of Sushant and the way Mahesh Bhatt, a 71 year old filmmaker being dragged into the issue, made Monish to compare it with “Isai” movie’s core plot.

Mahesh Bhatt, father of popular Bollywood actress Alia Bhatt and Rhea were rumoured to be dating when the actress starred in his film Jalebi. While the duo rubbished the rumours claiming that they share a close bond, their pictures went viral on the internet. Many pictures involving them are questionable in nature and raised suspicion on the nature of their relationship. Looking at Bhatt’s personal life, his past relations, types of movies he makes, and his media image, one cannot deny the fact that Mahesh Bhatt is a person of questionable character. Many people believe that Mahesh bhatt forced Rhea to leave Sushant.

In 2018, Rhea and Mahesh Bhatt’s pictures went viral in which they were seen hugging and getting close. The photos sparked controversy and were shared by Rhea herself on Bhatt’s 70th birthday.

On seeing the comparison made by the fan, SJ Surya who directed, performed and composed music for “Isai” shared the tweet and wrote “So strange”

Sushant Singh rajput was allegedly killed himself on night of 14th of June in his apartment. Rhea Chakraborty, girlfriend of Sushant singh Rajput confirmed her relationship with the actor and revealed that they were living together throughout the lockdown before she left his apartment due to a fight which broke out between them. She reportedly informed police officers about the details of their fight and showed them they were in touch via phone and text message after it during the interrogation. Rhea was the last person Sushant called before going to bed.

Comment your views on this comparison of the fan and Sj Surya’s reply to it !!