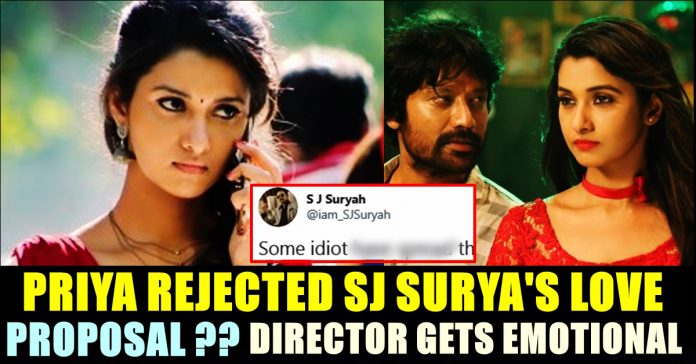 SJ Surya has finally opened on a rumour about his relationship with actress Priya Bhavani Shankar which has been doing rounds in social media since their first collaboration “Monster”. The rumour said that the director/ actor has proposed to the “Meyadha Maan” actress and she rejected it. Now in a way of clearing the air, Surya has posted a tweet and denied the allegation completely by expressing his frustration.

SJ Suryah who is very well known for his directorials, is now busy in acting feel good films. Followed by his adventure drama “Monster”, in which he paired with Priya Bhavani Shankar is again pairing with the actress for a movie which is being directed by “Mozhi” fame Radha Mohan. The title has been titled as “Bommai” and the posters of it released on Internet recently.

Priya Bhavani Shankar’s first recognition was as a Television News presenter in Tamil Puthiya Thalaimurai News Channel. She became very popular once started acting as a serial actress in Star Vijay Television Kalyanam Mudhal Kadhal Varai. The actress who gained many fan pages in social media platform in a very short span, has a separate set of fan following for her acting and screen presence.

As SJ Surya is pairing up with the actress for the second consecutive time, the rumour spread like a wildfire. Now in a way putting a full stop to it, SJ Surya through his official twitter account has said that he was irritated. He wrote “Some idiot have spread the wrong news that I made a love Propossal to @priya_Bshankar and she rejected it …. she a very good friend of mine since “Monster” & sincere actress too that’s it …. pls don’t irritate and spread false baseless rumours … thx … sjs”

Some idiot have spread the wrong news that I made a love Propossal to @priya_Bshankar and she rejected it …. she a very good friend of mine since “Monster” & sincere actress too that’s it …. pls don’t irritate and spread false baseless rumours … thx … sjs

Priya debuted in Tamil film industry with director Rathnakumar’s “Meyaadha Maan” in which she paired with actor Vaibhav. She is all set to be seen in Karthick Naren’s Mafia. After seeing this tweet from SJ Suryah, many of his followers reacted to it in various ways.

Few days back SJ Suryah posted a tweet comparing Priya Bhavani Shankar with Simran and Trisha which grabbed the attention of the netizens in big time. Check out the tweet here:

Check out some of the reactions for SJ Surya’s latest tweet from his followers below :

What do you think on this rumour and SJ Surya’s reply to it ?? Comment your views below !!