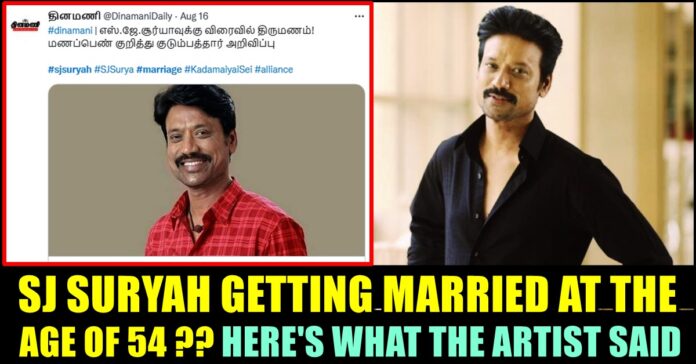 SJ Surya Finally Getting Married At The Age Of 54 ?? Here’s His Response

Director SJ Suryah who is currently busy acting in movies, clarified to the rumours that surfaced saying that the filmmaker is going to get married. According to Indiaglitz, Suryah responded to the speculations saying that he is not in a state of getting married and is happily concentrating on his upcoming projects. The renowned filmmaker uled out that the reports about his marriage are baseless. 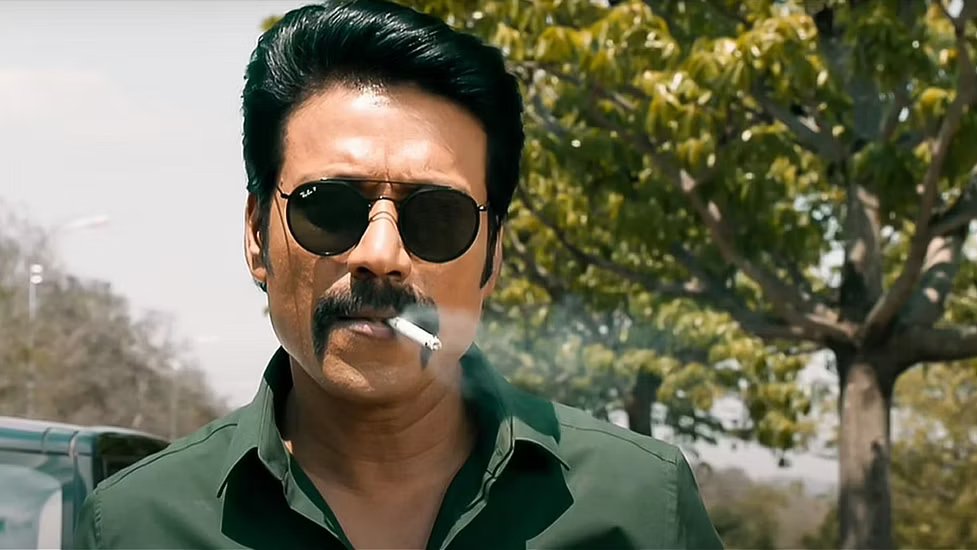 SJ Surya who is known for providing some epic love dramas to Tamil film industry through his filmmaking skills, is currently busy acting in films. He played villain for Vijay, Mahesh Babu lately, also essayed some light hearted protagonist roles with some intriguing roles in films such as “Iraivi”, “Nenjam Marappathillai”. His “Monster” garnered huge reception among kids and the multifaceted actor is having a number of films in his kitty as an actor as well.

The filmmaker’s performance as an antagonist in Simbu’s “Maanaadu” gained him huge recognition and he was last seen as an antagonist in Sivakarthikeyan’s “Don”. The film got positive response widely with many appreciating Suryah for the way he portrayed college dean role. While the actor is busy signing movies, a rumour surfaced saying that he is gearing up for his first marriage. 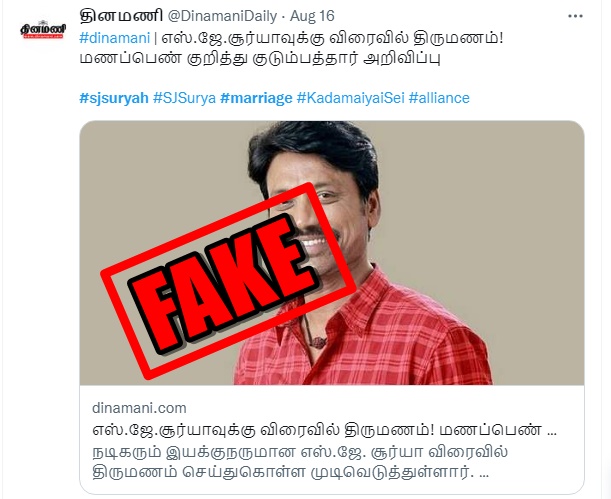 Now, responding to the reports about himself getting married at the age of 54, the actor reportedly said that they are mere rumours and wanted his fans and followers not to believe them. The seasoned artist said that he has no time to think about marriage and is currently happy remaining single, as per the report of Indiaglitz.

When asked about the news spreading that #SjSuryah is getting married,He replied that, Its 💯 False News & he doesnt have time to think about marriage in his busy schedule.@johnsoncinepro pic.twitter.com/GMbB3JAizK

Suriya also said that he is currently concentrating on shis creative ventures and brushed off the reports about his marriage. It is notable that Suryah, in a recent interview, identified himself as a “Morattu Single” and has no idea about marriage in future as well. On the work front, the “New” maker has signed a project named “Mark Antony” alongside Vishal and is also expected to play a cameo in Vijay’s “Varisu”. He was last seen in a film named “Kadamayai Sei” which had actress Yashika as female lead.

Previous articleWATCH : Karthi Opened About The Disadvantage In Being Taller Than Suriya !!
Next article“Why Should I Listen To You??” – TN FM PTR To PM Modi’s Comment On Freebies