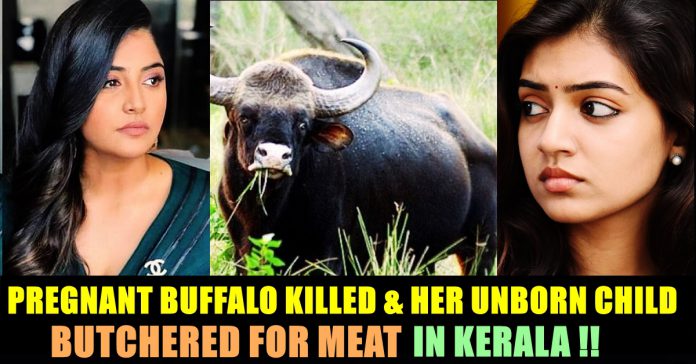 Months after a pregnant elephant died in Kerala after eating a cracker stuffed pineapple, reports on a pregnant wild buffalo getting killed along with its unborn child surfaced. The news on the Elephant’s demise grabbed global attention and people from across the world reacted to the outrage thinking that it was caused by some miscreants. However, sources from the state said that the cracker filled pineapple was made to save the crops from wild boars and the elephant was not intentionally fed. Now, in a way of remembering the incident, 6 men arrested for killing a pregnant buffalo for its meat in Kerala.

In the Puncha forest areas which is located in Pookottumpadam village in Malappuram district of Kerala, a group of Poachers killed the buffalo by shooting it with their gun. The men were also accused for killing the foetus that was growing inside the mother buffalo’s womb.

The officers of the forest department conducted a raid in the forest after receiving a tip from unknown sources on poaching of a wild animal on 10th of August. The raid revealed that a group of 6 men slaughtered the animal and dumped its bones, carcass and other hunting equipment in the forest. During the investigation, it was revealed that the animal was pregnant and was about to give birth to its baby.

“At the time, we did not know what animal it was. We assumed it was of a deer. During the course of the investigation, we came to know that it was a buffalo. Based on the confession of the accused and the bones we recovered from the site, we cam to know that it was pregnant.” Range officer P. Suresh said.

Abu, one of the accused in the case, shot the buffalo with his own gun. The forest officials also recovered 25Kg meat from one of the accused’s house. It is also reported that more than 200Kg of meat was already distributed after the slaughter. The accused who were tried to escape during the raid, were arrested and produced in court on Wednesday. All the six of them were booked under various sections of Wild life protection Act, 1972, for illegal hunting and trade. Officials are currently involved in invesitigating of there are more people involved.

Kerala basses Tamil actresses Manjima Mohan and Nazriya reacted to the issue slamming the culprits who are involved in the heinous crime. Actress Nazriya added “You Suck” in her Instagram story to express her emotion.

Animal cruelty seems to have been on the rise during the lockdown. In an extreme case of brutality, a monkey was hanged to death from a tree by three people in Telangana district in June. In another video which went viral in social media, men from Uttar Pradesh tortured a Monkey with Sticks and paint.

Previous article“Will You Make Me Next Sushant ?” Kangana’s Furious Reply !!
Next articleGirl Found Her Nude Pictures In Her Step Father’s Laptop !!

India's defeat to New Zealand in the semi-finals came as a surprise, with fans and experts calling it an upset. It seems like Virat...

The Most Awaited Character Look Of Vijay Sethupathi In “PETTA” Revealed & It Goes Viral !!

Petta is directed by Karthik Subbaraj and is his first collaboration with the Superstar. The movie has an ensemble cast which includes stars like...