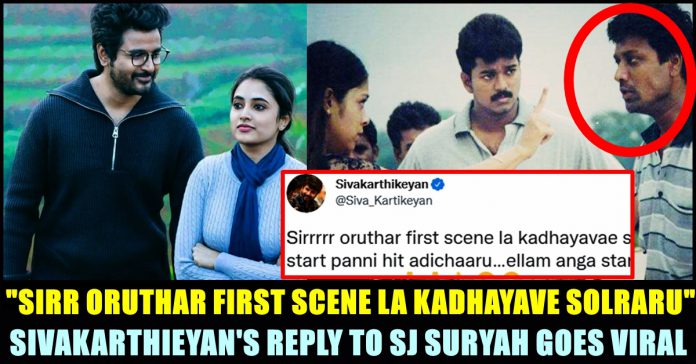 A reply made by Sivakarthikeyan to director cum actor SJ Suryah is going viral among the users of Twitter. Entire film fraternity is celebrating “Doctor” and hoping for the film to bring audience back to the theatres. SJ Surya expressed his admiration over how Nelson Dilipkumar handled the character in his film. Replying to him, SK thanked by mentioning the way he used to start his film after telling the entire story during the beginning. In films such as Kushi, Anbe Aaruyire SJ Suryah would tell the story in a simple manner in first few minutes and would hold the audience through his interesting screenplay and they went on to become box office successes as well.

“Doctor” film released in theatres on 9th of October amidst much expectations. The film became one of the first releases post COVID 19 lockdown. Plot of “Doctor” revolves around the protagonist who works as a doctor, decides to track down the antagonist who runs huge human trafficking mafia. He gets himself involved in the mission after finding a girl who belongs to the family of his love interest getting missed.

By having a bunch of comedy actors such as Yogi babu, Kingsley, Deepa and others, Nelson handled the film by giving importance to the humour. Amidst the tensed circumstance he creates, he himself orchestrates one liners and humorous punches which worked out well among the family audience. Several prolific filmmakers such as Shankar, Venkat Prabhu, Mari Selvaraj has posted tweet praising the film in their timeline.

Replying to his tweet, Sivakarthieyan said that everything started after someone made hit films after revealing the entire story in the first scenes. He also added that SJ Surya’s wishes means a lot to him. “Sirrrrr oruthar first scene la kadhayavae sollitu padatha start panni hit adichaaru…ellam anga start aana nambikkai sir. your wishes means a lot thank you so much sir” his reply tweet to SJ Suryah read.

Here’s how SJ Surya replied back :

Recently, SJ Suryah shared a post which appreciated his guts on starting films after revealing the story line to the audience.

Reports exists on SJ Suryah revealing the story of his film “Khushi” to magazines prior its release. Read : SJ Surya’s Open Challenge During Kushi !! WATCH !!

Previous articleList Of Celebrities Who Celebrated Dhoni’s Innings As Their Personal Achievement !!
Next articleCelebrities Mourning For The Demise Of This Veteran Actor !!

In the beach of Mahabalipuram, Chengalpattu, a sand sculpture of 160 feet tall was built for Tamil nadu cheif minister Edappadi K Pazhaniswamy. Pictures...

Actor Arav, of Bigg Boss Tamil fame, will reportedly play lead in his next film titled Market RajaMBBS. It is directed by Saran who has worked on Ajith’s Kadhal Mannan,...