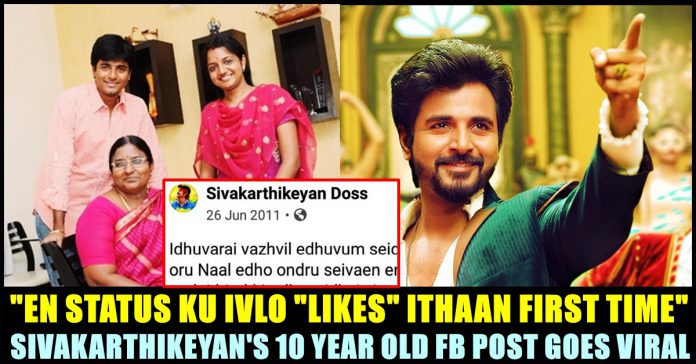 Old face book posts of actor Sivakarthikeyan who is considered as one of the top most actors of Tamil cinema, are going viral among the users of social media platforms. A reply he dropped in director Nelson Dilpkumar’s post is also trending among the twitter users with reactions saying that they never would have imagined about project “Doctor” at that time. In one of the posts, Sivakarthikeyan who seems to have got the opportunity to perform in Vijay TV, could be seen saying that he did nothing till that day and expresses his confidence about achieving something. One of the posts was uploaded in the year October, 2011.

Sivakarthikeyan has became the darling of masses in a very short span of time comparing to other senior actors. Not only the fans, he is also impressing the people from his own industry. When he received “Entertainer of the year” award from Vijay in the year 2014, the “Thalapathy” actor said “I have watched all his films. His dance, acting and comedy are impressive. Kids are loving him a lot. He grabbed a spot among kids”.

Most recently, his film “Doctor” released in theatres and almost entire film industry stood with him as the film was believed to bring back the audience to the theatres post COVID 19 restrictions. The film garnered huge reception from the fans and became one of the highest grossers of him in his acting career. Now, a number of posts he uploaded before becoming an actor are going viral in social media platforms now.

10 years – Good ten years, can do magic to your life !! pic.twitter.com/yhBQP2HdLK

“I didn’t do anything in my life till and a confidence has sprouted on myself for me. Let the seed grow bigger” Sivakarthikeyan says in the post that was uploaded on 26th of October, 2011. He also thanks his fans for “liking” his post and seeks support from them.

In another post that is going viral, Sivakarthikeyan wishes “All the best” to Nelson Dileepkumar who uploaded his poster of “Vettai Mannan” with Simbu, a project which got shelved.

On the work front, Sivakarthikeyan is busy shooting for his upcoming flick “Don” which is being made under his own production. He is also expected to be seen in “Ayalaan”, a science fiction of “Indru Nettru naalai” fame Ravikumar. Comment your views on these old posts of the actor !!