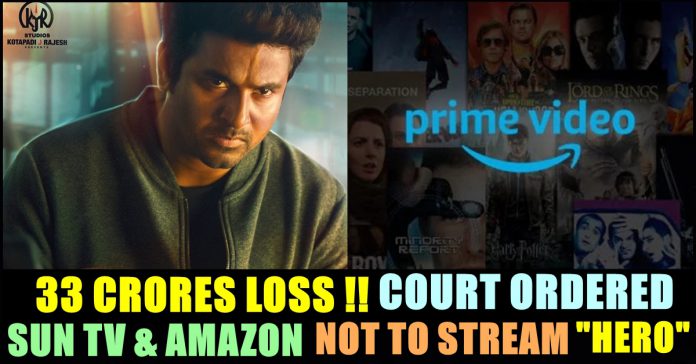 Unlike other Kollywood films which would get into trouble during its release time, Sivakarthikeyan’s “Hero” film is facing a serious problem after completing its theatrical run. The film is not going to stream in online platforms or in Television channels due to the plagiarism accusation against the film, according to reports.

The film directed by “Irumbuthirai” fame P.S Mithran talks about the flaw in the educational system of India. Added with commercial elements, the film conveys a message to the students and parents of current generation.

Produced by KJR studios, the film has Abhay Deol and Ivana in prominent roles. The female lead is going to be played by Kalyani Priyadarshan, who is making her debut Tamil film with “Hero”. During its release time, director and leader of South India’s writers association Bhagyaraj has declared that Hero’s story was a theft one.

Bosco Prabhu who is currently working as an assistant director for Atlee, has alleged that his story was stolen by the makers of “Hero” to the writers association. After brief inquiry, Bhagyaraj has declared that the story belongs to Prabhu. “All of them stated that both of your stories are similar. As I had the same opinion I asked Mithran to my office. “A Fraud hero – A sister who involved in research- A Villain who betrays her in the name of getting her the copyrights for her product- Sister’s Arrest- returning through train after release- Suicide- A reformed hero – Avenging the villain are similar in both the stories.” read the press release of Bhagyaraj at that time.

“I as a leader of writers association, with the confirmation of 18 committee members, declaring that both the stories are similar and providing you this letter as an evidence. Wish you the best of luck to get justice in court” said Bhagyaraj in his letter and redirected Bosco Prabhu to court.

Director Mithran denied the accusation against him. “Just because he thought of a story similar to mine, why should I pay money to him ??” asked Mithran in the press meet.“Till now writers union didn’t tell me that my story is a theft one directly to me. But when it led to an issue, they are labelling it as a theft story which is worrying me a lot.” the director said.

However, court’s judgement regarding the case has arrived, a couple of days before. It concluded that the story of “Hero” movie belongs to Bosco Prabhu, according to Valaipechu. As the film got released and completed its theatrical run, the court has ordered that the film should not be streamed in Television on online platforms. Now, Sun TV and Amazon Prime who bought the rights of the film for 21 crores and 12 crores respectively, could not stream the movie in their platforms. Due to this loss, Producer of Hero film is going to face a huge problem it seems.

Watch the video below from 4th minute :

Sivakarthikeyan and KJR studios are collaborating in his upcoming film “Doctor” which is going to be directed by Nelson Dilipkumar. Meanwhile, director Mithran is going to direct actor Karthi in his next, according to reports.

Former ADMK minister D. Jayakumar, through a tweet, blamed government for not preventing the circulation of illegal drug "Ganja" in state Tamil nadu and...

Actor Vimal, reacting to the money laundering accusations emerged against him, has issued a statement to the press reporters. The actor said that the...