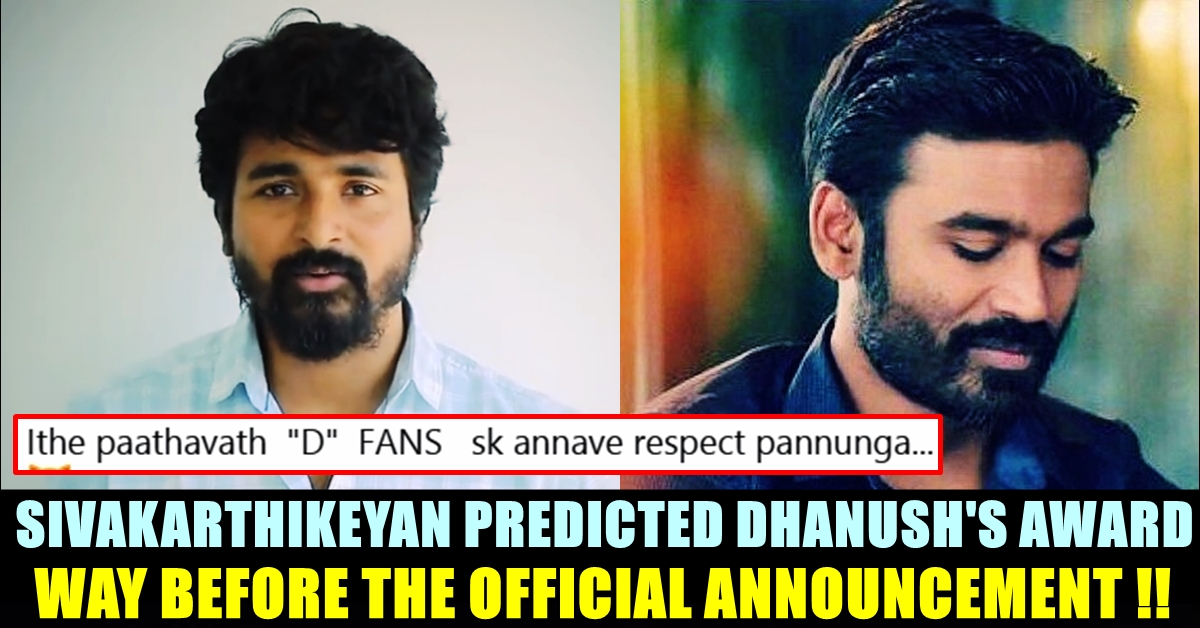 The official announcement on the winners of National awards was made on 4 PM of Monday. Dhanush, Vijay Sethupathi, Parthiban, Rasul Pookutty, Vetri Maaran, D. Imman won the prestigious award on behalf of Tamil film industry. Now, a reply tweet of actor Sivakarthikeyan predicting Dhanush’s achievement of winning the National award for the second time in his career is going viral among the fans of both the actors.

South Indian cinema has got highly recognised in the 67th National Film awards as Marakkar: Arabikadalinte Simham, and Maharshi won the Best Film, and Best Popular Film, respectively. Dhanush’s role as Sivasami in “Asuran” won him the best actor award for the second time in his acting career. The film also became the best Tamil film. Actor Vijay Sethupathi won his first national award as a supporting actor for acting as a transgender in “Super Deluxe”.

Parthiban’s “Oththa Seruppu” garnered the special jury award and D.Imman received best music director award for composing music for Ajith kumar’s “Viswasam”. As soon as the announcements were made, people of Tamil social media wished the achievers by uploading posts and reactions.

Prior the announcement, the official twitter handle of Cinema Vikatan uploaded a tweet asking their followers to predict which films that were released in 2019 are going to win the awards. Check out their post below :

Among the many followers who dropped their predictions, Sivakarthikeyan who is pretty much interactive in Twitter came up with a comment saying that Dhanush will win the award for Asuran. “Asuran , Dhanush sir” said Siva by adding a thumbs up emoji exactly on 3 : 21 PM minutes before the announcement.

This tweet of him received 17k plus likes from the users of Twitter with several kind of reactions praising him for the trust he has on the one who helped him during the initial stage of his career. Check out some of the reactions for the accurate prediction of SK :