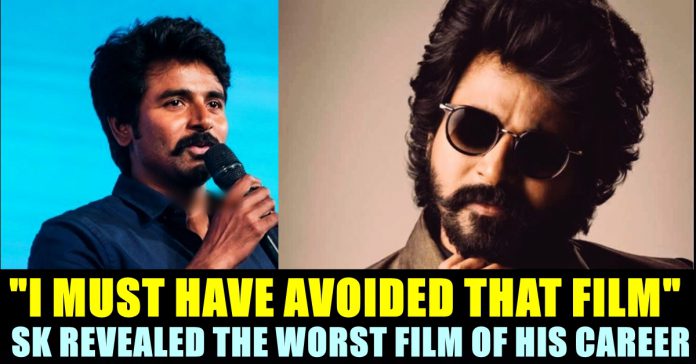 Actor Sivakarthikeyan, who enjoys a fan following among all age groups and across genders, is the upcoming star in Tamil film industry. He was last seen in Namma Veetu Pillai, directed by Pandiraj who is known for his intense contents. Now his upcoming film Hero’s trailer released and is currently trending at number 1 in youtube. The two minute long trailer shows the protagonist Sivakarthikeyan as an aspiring super hero from childhood.

It further indicates the film as a social thriller with some science fiction elements. Action king Arjun who utters some powerful dialogues is going to excel in the film in big time it seems. It is notable that his previous collaboration with director Mithran in Irumbu thirai worked out so well among the audience.

Now the “Ethir Neechal” actor started attending promotional interviews for his upcoming film “Hero” in which he shared many things including how the film was made and initiated. He said that he and director P.S Mithran planned to do a film like Gentleman which is director Shankar’s debut film. Considering Sivakarthikeyan’s market and his reach among kids, P.S Mithran added the superhero element in the film, according to Sivakarthikeyan.

In this interview with Cinema Express, Sivakarthikeyan explains on how he handles the criticism he has been receiving for the movies he is doing. When the interviewer asked him what made him to accept Mr. Local as a flop film, Sivakarthieyan said that he received criticism for Remo itself but it was a commercially successful film. “Remo collected more than 50 crores in tamilnadu itself. After Rajini Murugan, it was one of the most successful film in my career. But as far as Mr.Local is concerned, it was my solely my mistake. I love Rajesh sir very much. It was not his mistake at all. I should have asked him to change the script.” said Sivakarthikeyan in his interview.

Watch the interview from 16th minute :

Further Sivakarthikeyan added that he had a mental pressure to complete the film at that time. “I had a mental pressure to finish the film and come out of it. So I chose to finish the film as soon as possible. He made films like Boss engira Baskaran, Siva Manasula Shakthi and OK OK which entertained the entire audience. I should have been more careful in my job” said the actor in his interview.

Sivakarthikeyan started his career as a mimicry artist. Despite initial reluctance to participate, he won the show. Prior his hosting career, he appeared in short films including his friend Atlee’s Mugapputhagam, Identity, Kurahl 786 and 360°. What do you think on this honesty of the emerging actor ?? Comment your views below !!

Previous articleAtlee Indirectly Announced About His Next Project !! Reactions Pouring !!
Next articleFirst Ever Indian Film To Be Remade In China !! Watch Trailer !!

Abirami’s Conversation With Her Jail Mates !! “Because Of His One Word My Whole Life Spoiled” She Says !!

Lokesh Kanagaraj Revealed About The News Which Inspired Him To Make A Film !!

Director Lokesh Kanagaraj's "Kaithi" film became one of the biggest blockbusters of the year 2019. The film received so many awards in several categories...