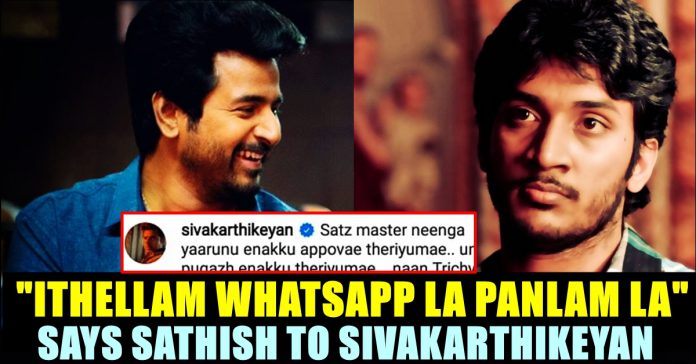 Sivakarthikeyan is spending most of his quarantine time in online it seems. His twitter timeline is filled with the pencil drawings of his fans and fan made posters of his upcoming posters as the “Remo” actor is liking and retweeting them in a way of encouraging his fans. He also involved in online banter with his colleagues in certain occasions. Now, his comment in dance choreographer Sathish’s post has grabbed the attention of the netizens.

As we all know Sivakarthikeyan started his career as a mimicry artist in Television platform. Despite initial reluctance to participate, he won the show. Prior his hosting career, he appeared in short films including his friend Atlee’s Mugapputhagam, Identity, Kurahl 786 and 360°. After debuting in Tamil film industry as protagonist through Pandiraj’s Marina, Sivakarthikeyan went on to give massive successes such as Maan Karate, Remo etc. Dance choreographer Sathish also hailing from television industry and their career in Tamil cinema grew together.

Now, Sathish who is also very much active in online platforms, recently posted an old video of himself performing in stage of Filmfare award function for “Azhagiye” song from “Kaatru Veliyidai”. He added “Azhagiye . High on stage” as caption for his post.

Sivakarthikeyan who is a dear friend of Sathish for a long time from his Television times recently worked with him in Hero film. On seeing this post from the dancer, Siva posted a comment saying that he known about Sathish very well long back. “I know about your popularity very well back then. When I was in Trichy” he said in his comment. “Satz master neenga yaarunu enakku appovae theriyumae.. unga pugazh enakku theriyumae… naan Trichy la irukkum bodhuuuu…” read the comment of SK to which Sathish replied by politely asking him to forget the Trichy story.

SK went on to threaten Sathish on making what happened in Trichy public. “I will forget that after letting the world know about it for one time. But you are not just another ordinary person in Trichy Satz na” said SK with funny emojis. “Some things needs to be forgotten. “You will be doing a good thing to me by forgetting about it. I believe you will forget it soon” Sathish replied.

Siva replied to this comment by saying that he will try to forget it. Sathish asked him to troll in Whatsapp if he feels like it.

Disappointed followers insisted Siva to reveal the secret but the actor left with out revealing it. Actor Sivakarthikeyan, who enjoys a fan following among all age groups and across genders, is the upcoming star in Tamil film industry. He was last seen in Namma Veetu Pillai and Hero directed by Pandiraj and P.S Mithran respectively. Being one of the busiest actor in Kollywood industry right now, SK is having commitments for nearly half a dozen movies and his third production venture also getting ready on full swing.

Comment your views on this friendly banter between Sivakarthikeyan and Sathish !!

Actor Dhanush's father and filmmaker Kasthuri Raja opened on the divorce announcement made by his son. He said that they didn't divorce but what...