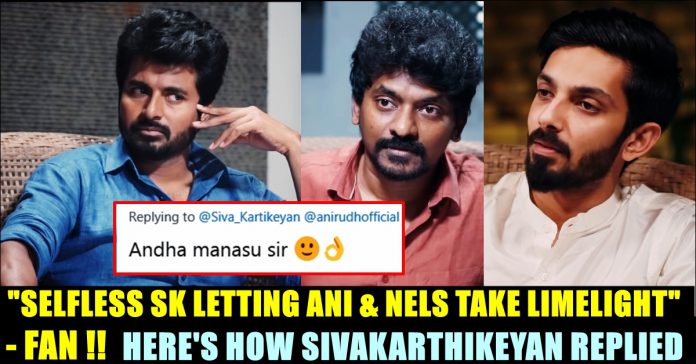 Sivakarthieyan’s upcoming film Doctor’s music video of “Chellamma” song garnered 100 million views in youtube and the makers of it became extremely happy and has been sharing posters, tweets celebrating the immense feat. “Another century from our Rockstar @anirudhofficial” said Sivakarthikeyan in a tweet to express his happiness to which music director Aniruth said that the original video song which has Sivakarthikeyan and Priyanka Mohan dancing will hit double century.

“Sir your dance in the movie for #Chellamma along with @priyankaamohan will hit double century for sure ! @Nelsondilpkumar” read the reply tweet of the music director.

Sir your dance in the movie for #Chellamma along with @priyankaamohan will hit double century for sure ! @Nelsondilpkumar

Watch the video song below :

The “Doctor” crew’s next single “So baby” released recently. The song got released on the 25th of February and was sung by music director Aniruth Ravichander. In no time, the song garnered 5 million views in youtube with 3 lakh plus likes. The visuals of the song showed Anirudh Ravichander singing the song with his crew behind. The video also showed the glimpse of how, where and why the song is going to be featured in the film.

With the beautiful montages and appealing visuals, the music video became a huge hit among the fans which is evident through the likes and views. Watch the video below :

Lauding Sivakarthikeyan for his nature of letting his friends take the limelight by allowing them to make fun of him, Film tracker Kaushik uploaded a tweet writing “Be it #Chellamma or #SoBaby, selfless Sivakarthikeyan let Anirudh Ravichander (music, counter lines) and Nelson dileepkumar (viral humorous punchlines) take the limelight, & was happy to play the support part👌The trio are a deadly hero/lyric – music – director combo!”

Replying to this tweet, Sivakarthikeyan said that he will do anything for his dear most friends Anirudh Ravichander and Nelso Dilipkumar. “Thank u bro 😊😊👍Anything for my dearmost friends” the actor’s reply tweet read.

Thank u bro 😊😊👍Anything for my dearmost friends 🤗🤗

Check out some of the reactions for Sivakarthikeyan’s reply below :

"Dearmost friends"
Aaawwhhhhhh😍😍😍😭😭😭😭😭 stay the same forever! God! Please save them from all evil eyes

My star! Your humility is what taking you really really high💯#100MForChellamma

Previous articleMayanti Langer’s Important Message To Haters Who Trolled Her Husband In The Past !!
Next article“Please Don’t Take Things Personally” – Pavithra lakshmi’s Message To Fans !!

India successfully won the T20 series against Australia in Australia and made the fans of Indian cricket team extremely happy. Though they lost the...

Several reports from various news portals emerged on Sunday alleging that the star couple of Kollywood Vignesh Shivan and Nayanthara tested positive for...