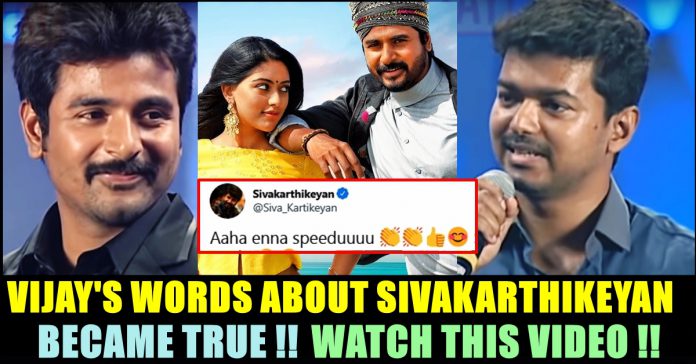 We all remember that one thing said by Thalapathy Vijay to Sivakarthikeyan in Vijay Awards, 2014. He said that Sivakarthikeyan attracted the kids with his screen presence and with the movies he chooses to do. Now, in a way of proving it as true, Sivakarthikeyan has been sharing videos which shows kids celebrating the songs of the actor while it is getting played in their home’s television.

In the video Sivakarthikeyan shared on the 6th of March, we can see a child crawling from far away towards where the song “Gummuru Duppuru” is playing. The song took place in Sivakarthikeyan’s recently released film “Namma Veetu Pillai”. Lokesh, who shared the video wrote “see how quickly she is coming when turn on #GandhaKanazhagi song. Even she can see this songs n number of times and never gets tired. #Nivi” by tagging Sivakarthikeyan and music composer Imman.

@Siva_Kartikeyan @immancomposer see how quickly she is coming when turn on #GandhaKanazhagi song. Even she can see this songs n number of times and never gets tired. #Nivi pic.twitter.com/uQTGDNBzqR

The video reached many people in Twitter and grabbed the attention of Sivakarthikeyan. The “Remo” actor who saw the video, got excited and replied to it immediately by writing “Aaha enna speeduuuu Super cute #Nivi papa”

When Thalapathy Vijay was asked to tell few words about Sivakarthikeyan, he said “I have watched all his films. His dance, acting and comedy are impressive. Kids are loving him a lot. He grabbed a spot among kids”

Watch the video below from 9th minute :

Sivakarthikeyan is one of the busiest actor in Kollywood industry right now. Having commitments for nearly half a dozen movies, Sivakarthikeyan’s third production venture also getting ready on full swing.

As we all know Sivakarthikeyan started his career as a mimicry artist. Despite initial reluctance to participate, he won the show. Prior his hosting career, he appeared in many short films. After debuting in Tamil film industry as protagonist through Pandiraj’s Marina, Sivakarthikeyan went on to give massive successes such as Maan Karate, Remo etc. So far Sivakarthikeyan paired with almost all the top heroines such as Nayanthara, Samantha, Keerthy Suresh and Hansika.

Comment your views on these videos shared by Sivakarthikeyan !!

No one will deny the fact that Movie watching is an experience and it should be felt. But nowadays, people who are entering cinema...

On Tuesday, Second single of the most expected "Varisu" got released on internet and received huge reception from the fans of actor Vijay. The...