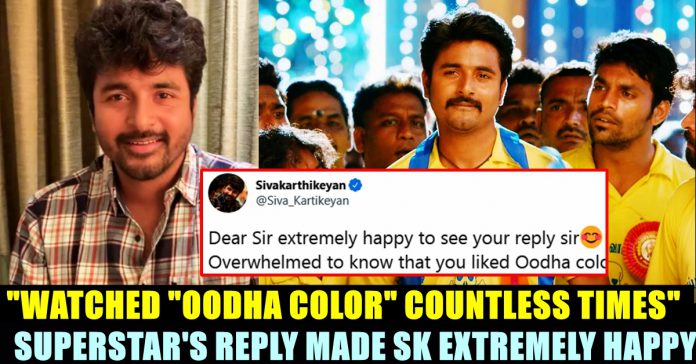 Sivakarthikeyan Got Extremely Happy On Seeing This Reply From His Favourite Actor !!

Sivakarthikeyan has became the darling of masses in a very short span of time comparing to other senior actos. Not only the fans, he is also impressing the people from his own industry. When he received “Entertainer of the year” award from Vijay in the year 2014, the “Thalapathy” actor said ““I have watched all his films. His dance, acting and comedy are impressive. Kids are loving him a lot. He grabbed a spot among kids”.

Now, Telugu Superstar Pawan Kalyan who enjoys a huge fanbase in Telugu film industry similar to Vijay, has appreciated the “Maan Karate” actor while replying to his Birthday wishes. The reply tweet of the “Vakheelsab” actor went insanely viral in the micro blogging social media site.

Actor Pawan Kalyan who turned 49 on Wednesday, is an actor, producer, director, screenwriter, stunt coordinator, playback singer, choreographer, and politician. He is well known for his mannerisms and stylish fight sequences which he depicts in his movies regularly. He is the youngest brother of Telugu Superstar Chiranjeevi. He is one of the most celebrated actors in the country with huge fanbase.

Along with many other celebrities, Sivakarthikeyan also wished Pawan Kalyan on his birthday by writing “Wish you a very happy birthday Pawan Kalyaan sir”

On the next day, Pawan Kalyan , while thanking everyone who wished him for his birthday, thanked Sivakarthikeyan as well. In addition, the Power star said that he love Sivakarthikeyan’s “Oodha Colour-uh ribbon song” very much. “I have seen it countless times.” the senior actor added. “Dear Thiru Shiva Karthikeyan, Thank you for your warm wishes. Wishing you very best for your success . And I love your song . ‘ Oodha colour ribbon.’ I have seen it countless times.” Pawan said in his tweet.

Dear Thiru Shiva Karthikeyan, Thank you for your warm wishes. Wishing you very best for your success . And I love your song
‘ Oodha colour ribbon.’
I have seen it countless times.🙏

An excited Sivakarthikeyan who mentioned his admiration towards Pawan Kalyan in several occasions, replied back by writing “Dear Sir extremely happy to see your reply sir. Overwhelmed to know that you liked Oodha color ribbon sir..Big thanks for taking time and acknowledging the love and for your kind words sir”

Dear Sir extremely happy to see your reply sir😊😊Overwhelmed to know that you liked Oodha color ribbon sir..Big thanks for taking time and acknowledging the love and for your kind words sir 🙏😊 https://t.co/E19Q3nfGFr

This reply from Pawan Kalyan made the fans of Sivakarthikeyan extremely happy. SK is one of the busiest actor in Kollywood industry right now. Having commitments for nearly half a dozen movies, Sivakarthikeyan’s third production venture also getting ready on full swing.

As we all know Sivakarthikeyan started his career as a mimicry artist. Despite initial reluctance to participate, he won the show. Prior his hosting career, he appeared in many short films. After debuting in Tamil film industry as protagonist through Pandiraj’s “Marina”, Sivakarthikeyan went on to give massive successes such as Maan Karate, Remo etc. So far Sivakarthikeyan paired with almost all the top heroines of Kollywood such as Nayanthara, Samantha, Keerthy Suresh and Hansika.

In the first encounter between Chennai Super Kings and Mumbai Indians, the former won the match with ease and broke the losing streak against...

Tamilnadu recorded its first death due to the deadly COVID 19 during the wee hours of March 25. Minister Vijaya Bhaskar took twitter to...

Post Diwali celebrations, Tamil cinema celebrities were busy posting videos and photos captured on the special day of the festival of lights in their...