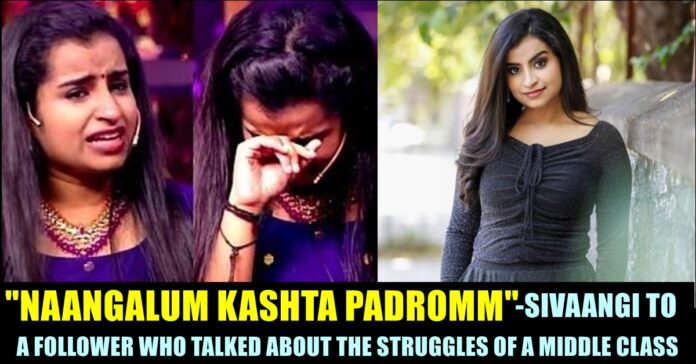 “Cooku with Comali” fame Sivaangi Krishna kumar’s reply to a follower who said that the singer is living a life that has no hardship such as attending interviews and waiting for the result of it. Replying to her, Sivaangi explained about how hard it is to be an artist and about the struggles she is going through to satisfy each and every audience is trending among the fans of the multi faceted.

Sivaangi became the darling of masses through her stint in the cookery named “Cooku with Comali” show which demands a seasoned cook to collaborate with a comedian to cook a dish to impress the judges. After the success of season 1, the makers have inaugurated the second season with a list of contestants which included Sivaangi and other comedians. Sivaangi who initiated her career as a child singer, has appeared in Sivakarthikeyan’s “Don” as a college studying student. Her relationship with her “CWC” co-contestant Ashwin has a separate fan base as well.

The 21 year old singer enjoys a huge fan following in online platforms. A sum of online users has been spreading hatred against the emerging artist as well. Recently, a follower dropped a comment on Sivaangi’s one of the posts saying that she doesn’t have to go through the phase where youngsters of middle class are attending an interview and waiting for the invite to join.

Here’s the screenshot of the users comment and Sivaangi’s reply : 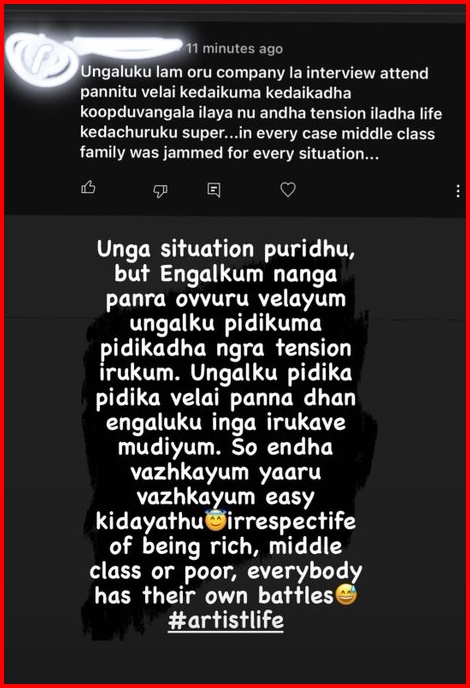 Here’s how her fans reacted :

Can’t be more proud of her ❤️😘 #sivaangi @sivaangi_k pic.twitter.com/8amlTMpRU7

#Sivaangi has proved it many times by actions and by words that she knows how far she has come, that she has a life that not everybody has and most importantly has shown endless times how grateful she is for her opportunities. She never denied her privileges.

Exactly the same thoughts🙌. Her words never hurted. Rather like a friend / neighbour who share their problems, She represented the whole industry with one tweet. It’s not attention seeking. She tries to change common man perspective towards media people. @sivaangi_k #sivaangi https://t.co/C9C60f0ioE

“Everyone has their own struggles.” How true is that! Her maturity is shining here. If anyone calls her immature again I’m going to slap them with this. @sivaangi_k Keep going my little rockstar! Overcome all your struggles and win life! #sivaangi #maturity pic.twitter.com/MF4GE4iXel

Previous article“I Missed To Act In VTV, SMS & Ratchasan” – Young Hero Opened For The First Time !!
Next articleWhat It Is Like Living in a Sober House: A Complete Guide

Nithya Balaji’s marital troubles have come out again in public again after she filed a complaint against her husband Thadi Balaji citing that he...