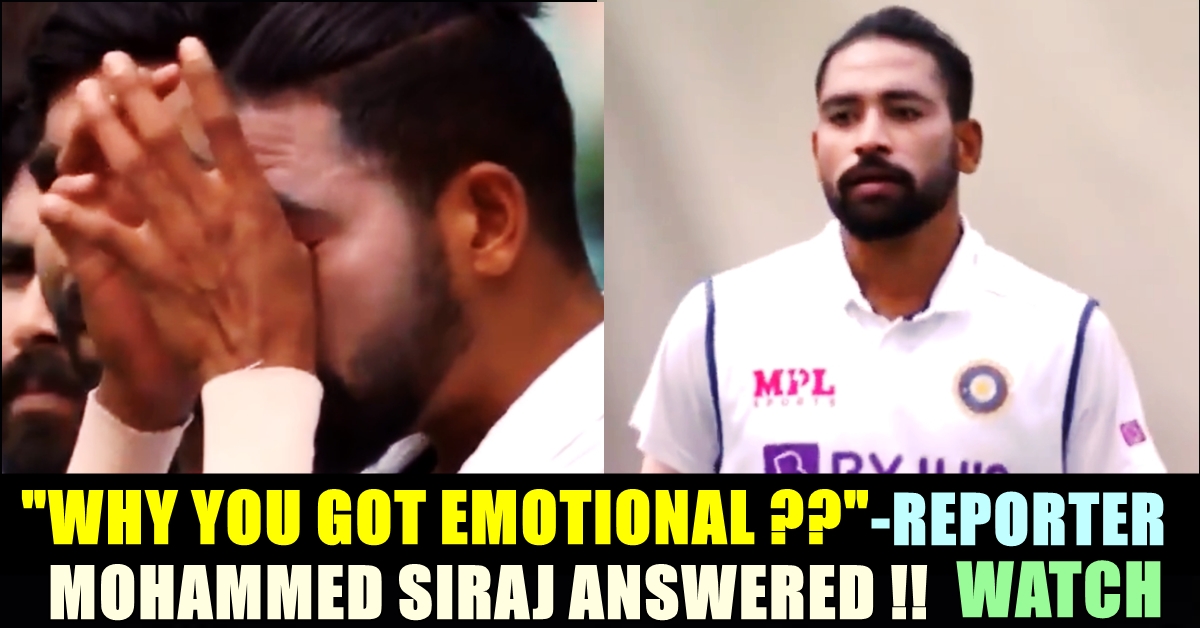 After shedding tears when national anthem played during the inauguration of the third test between India and Australia , Mohammad Siraj became the talking point in social media. Many players from team India and foreign countries became emotional on seeing the youngster crying and expressed their emotions through tweets. Now, Mohammad Siraj himself opened on why he became teary eyed at that moment and the reason he stated made fans extremely emotional.

Siraj made his test debut in the second match of this ongoing series at the Melbourne cricket ground. While singing the national anthem during the start of the match, Siraj tore up. Tears came rolling down from Siraj’s eyes and it wasn’t stopped until the fast bowler wiped it off. Bumrah who was standing aside, noticed and consoled his teammate.

“I just want certain people to remember this picture. He is #SirajMohammed and this is what the national anthem means to him” wrote former Indian star fielder Mohammad Kaif on seeing the emotional moment whereas former Indian test opener Wasim Jaffer uploaded a tweet writing “Even if there’s little or no crowd to cheer you on, no better motivation than playing for India. As a legend once said “You don’t play for the crowd, you play for the country.”

Not only players, even ICC tweet about the incident in its official twitter handle. Check out them below :

Mohammed Siraj provided a glimpse of what it means to represent your country in international cricket ✨#AUSvINDpic.twitter.com/HpL94QH5pr

I just want certain people to remember this picture. He is #SirajMohammed and this is what the national anthem means to him pic.twitter.com/eJi9Xeww8E

Even if there’s little or no crowd to cheer you on, no better motivation than playing for India. As a legend once said “You don’t play for the crowd, you play for the country.” 🇮🇳 #AUSvIND pic.twitter.com/qAwIyiUrSI

Whole country proud of you Siraj
❤passion and emotion❤
This is my moment of the match already. #MohammedSiraj👏👏 #SydneyTest #AUSvIND

How its Started How its going pic.twitter.com/mCS9SFVB7i

Meanwhile Siraj was asked to answer on why he got emotional by the reporters and the cricketer revealed that he remembered of his father at that time. “During the national anthem, I remembered my dad, that’s why I cried. I got really emotional. Dad wanted to watch me play test cricket. If he was there today, he would have watched me play” Siraj said while interacting with the reporters.

Mohammed Siraj remembered his late father as he got emotional during India’s national anthem at the SCG 🇮🇳#AUSvIND pic.twitter.com/PmUqFQPBCj

Siraj lost his father Mohammad Ghaus on 20th of November, 2020. At that time, Siraj was in Australia with team India. He couldn’t return home due to COVID 19 restrictions and missed his father’s funeral. Siraj sent the dangerous David Warner back to the pavilion with his seam bowling and is expected to win the test series for Team India. Let us wish him all the best to do well in the ongoing test series and for his future !!

“Bala Protecting Shivani ?” Questioned This Evicted Contestant !!
“They Should Maintain A limit – Celebrity Points Out !!