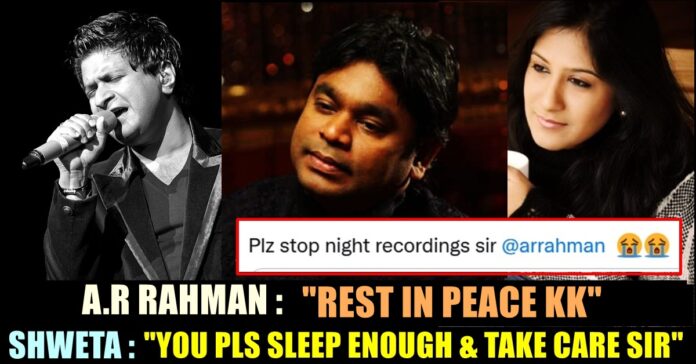 After A. R Rahman uploaded a tweet expressing his emotion over the demise of 53 year old ace singer KK, singer Shwetha Menon dropped a comment requesting the Oscar winner to get enough sleep and look after his health. As soon as Shwetha made her comment, many ther music fans started requesting Rahman the same and one of them pointed out how hectic Rahman’s schedule is and advised him to take care of his health.

The demise of ace singer KK left the entire country, especially the music industry devastated. Right from prime minister Narendra Modi to Former Indian Captain Virat Kohli, many influential personalities from various industries offered their condolences through tweets, videos and posts. The write ups which came from the accounts of prominent Tamil musicians made fans go emotional. KK collaborated with almost all the top Tamil music directors and his loss shattered them which is evident through their posts.

Ace singer Krishnakumar Kunnath, popularly known as KK among the fans and film fraternity, died at the age of 53, shortly after performing in a concert in Kolkata. It has been reported that the singer collapsed after performing in the concert and was rushed to a private hospital in the city. Hospital authorities said that KK was brought dead. 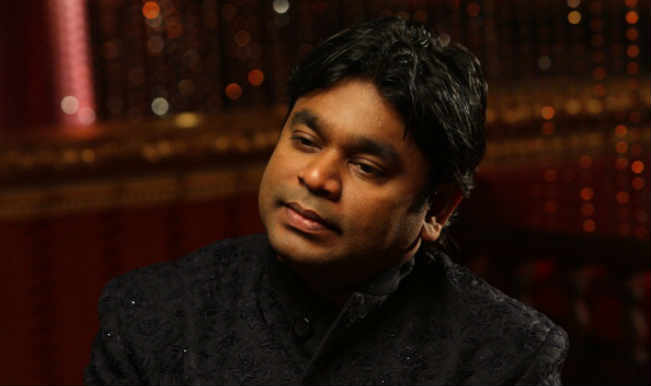 Earlier the day, the singer posted picture from the concert which took place at Kolkata’s Nazrul Mancha. Being one of the most versatile singer of Indian cinema, KK has recorded songs in various languages including Hindi, Tamil, Telugu Kannada, Bengali and in many more languages. It has been reported that KK died due to heart attack.

Academy award winning musician A.R Rahman came up with a tweet in his official twitter account, asking KK what’s the hurry for him as he was just 53 years old. “Dear KK ..what’s the hurry buddy.. gifted singers and artists like you made this life more bearable.. #RIPKK” said A.R Rahman through his tweet to express his emotion. They both collaborated in a number of song that became chartbusters.

Dear KK ..what’s the hurry buddy ..gifted singers and artists like you made this life more bearable..#RIPKK

Replying to Rahman’s tweet, Singer Shwetha came up with a request asking him to take care of his health by getting enough sleep. ” 🙏🙏 Sir, pls get enough sleep and look after your health … 💝💝” read her reply.

🙏🙏 Sir, pls get enough sleep and look after your health … 💝💝

“Yes please take care of health. Busy, non stop schedules, traveling, loss of sleep – body can’t absorb this stress as much as we age. Health is wealth” a follower replied with many others endorsing Shwetha’s request.

“When I Met Atlee, He Asked Me To Point Out The Guy Who Informed Me” Selvah’s Shocking Interview !!