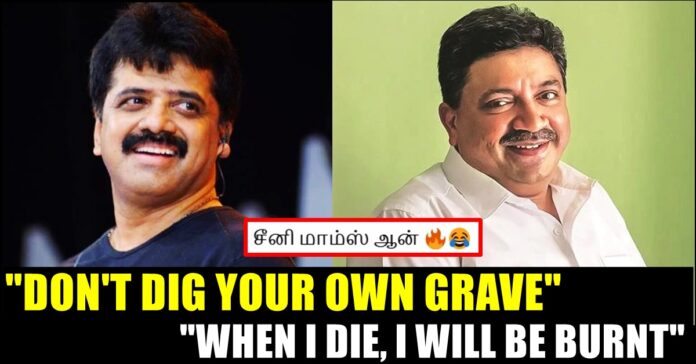 For expressing his admiration over Tamil nadu finance minister Palanivel Thiaga Rajan, a twitter user suggested him not to make such comment and dig his own grave. Replying to him, the renowned singer said that he will be “burnt” when he dies. The reply grabbed the attention of the users of micro blogging social media site.

On Thursday, finance minister of state Tamil nadu, came up with a tweet in his twitter timeline that showed himself explaining why Tamilnadu is being targeted at the parliamentary debates. The Minister said that the union government doesn’t like Tamil nadu acting independent and believing in colonialism. “Why is Tamil Nadu constantly targeted in parliamentary debates?” wrote PT while sharing the video in his official twitter handle.

check out his video below :

Why is Tamil Nadu constantly targeted in parliamentary debates? pic.twitter.com/bKVh6PgREW

Sharing the video, renowned playback singer Srinivas came up with a tweet admiring PTR for his answer. Srinivas said “This man .. wish politics had more of his breed .. at the least about 100 across the country” through his tweet.

Among the several kind of comments that surfaced for the tweet of Srinivas, a user said “Don’t dig your own grave. Stay away from political comments. You are not cut out for that” to which the singer replied back saying “When I die I will be burnt I guess”

When I die I will be burnt I guess

The reply from the singer gained the attention of his fellow online users with many lauding him for shutting down the hate comment in style. Check out some of the reactions below :