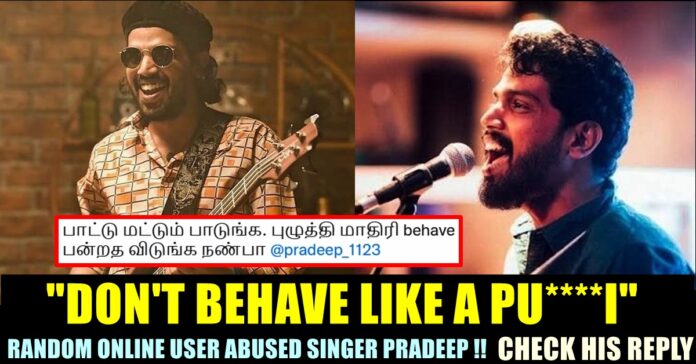 Pradeep Kumar who enjoys a separate fan base for his voice and music composition, in the wee hours of Saturday, replied to a random online user who made an abusive tweet against him. The singer, unlike others, replied back without losing his cool and the tweet is trending among the users of the micro blogging social media site.

Popularly known as singer Pradeep, Pradeep Rangaswamy Kumar started his career as a Carnatic musician, in the 2010s, and has rose to fame after regularly collaborating with composers Santhosh Narayanan and Sean Roldan.

Being a Trichy born, Pradeep kumar got introduced in mainstream cinema as a musician through “Attakathi” of Santhosh Narayanan. Initially, Pradeep collaborated with Santhosh as his acoustic guitarist. Later, he started featuring as a singer prominently for other music directors.

Pradeep debuted as music director through Rathna kumar’s first film “Meyaadha Maan”. After composing just two songs in the film, the musician became main musician for the filmmaker’s second film “Aadai”. He went on to compose music for films such as “Sillukarupatti”, ” Vaazhl”, “Kuthiraivaal” etc.

However, as we all know, small amount of hate comes hand in hand with the large amount of love we receive from people. On Saturday, a twitter user, tagged Pradeep Kumar and used a cuss word to criticize the singer. “Just sing songs. Stop behaving like a ******” the user said through his tweet.

The tweet grabbed the attention of Pradeep Kumar himself who came up with a reply thanking the online user, referring him as a friend. Unlike other celebrities who would have blocked or condemned the random user, Pradeep decided to stay calm and expressed him emotion by replying “நன்றி நண்பா”

On the work front, Pradeep is expected to compose music for many films and lend his voice for many more songs. Most lately he sung a song that starts like “Un Paarvai” for the OTT released film “Cadaver” starring Amala Paul.

Television actress Sameera Sherif recently announced through her social media accounts about her pregnancy. She who got married to her "Pagal Nilavu" co-star Syed...

Bharatiya Janata Party has been facing a tough time in the South. Videos of biggies of the party doing inappropriate activities on video calls...

A clip from a serial named "Peranbu" of Zee Tamil channel, became a subject to severe criticism among the online users due to the...