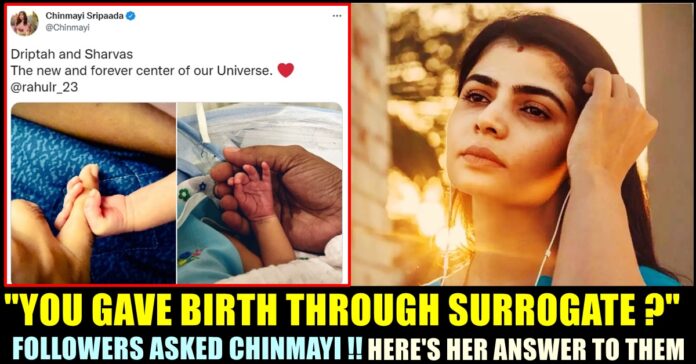 Singer Chinmayi, on Tuesday, made it public that she got blessed with a twin babies, a boy and a girl and responded to the rumours and speculations on whether she gave birth to the children through surrogacy. The singer said that only the innermost circle of people know about her pregnancy as she was protecting herself and also confirmed that the pictures of their children wouldn’t be uploaded in online for a long while.

Here’s the post shared by the husband and wife duo :

Along with the followers of Chinmayi, many celebrities wished the couple a very blessed future ahead. “Whoaaa you did a 1 hour spaces 2 weeks back when you were pregnant? 😳 Hats off to you! And awwww this is so cute. Congratulations!! ♥️” a  twitter user commented to which Chinmayi replied saying “Hahaa yes 🙂
Thats why the breathing issues and why it had to be short”

Hahaa yes 🙂
Thats why the breathing issues and why it had to be short https://t.co/Aq5BiFEcqs

However, many of the singer’s followers directly messaged her asking whether she had the twins through surrogacy as she didn’t upload the pictures of herself being pregnant in social media. Replying to them, Chinmayi said that her delivery was a caesarean and only the inner most circle of people know about her pregnancy.

“I’M ABSOLUTELY LOVING THESE PEOPLE WHO ARE DM-ING ME ASKING IFI HAD TWINS THROUGH A SURROGATE JUST BECAUSE I DIDNT POST PHOTOS OF ME BEING PREGNANT. ONLY THOSE WHO WERE MY INNERMOST CIRCLE KNEW BECAUSE I WAS PROTECTING MYSELF. I WAS AND WILL ALWAYS BE EXTREMELY GUARDED ABOUT BY PERSONAL LIFE, MY FAMILY, MY FRIENDS CIRCLE. PHOTOS OF OUR KIDS WONT BE ON OUR SOCIALS EITHER FOR A LONG WHILE. AND IF YOU NEED TO KNOW I ACTUALLY *SANG A BHAJAN DURING THE CAESAREAN AS OUR TWINS ENTERED THE WORLD. GET A GRIP OF THAT MORE ON THIS LATER. BUT FOR NOW THIS IS ENOUGH” read Chinmayi’s reply.

Adding the post, Chinmayi said “Our twins are a GIRL and a BOY” through her caption.

Previous articleActress Sonia Agarwal To Marry This Famous Celebrity ??
Next articleCheck How Vijay Fans Reacted To Nelson’s Emotional Wishes To Vijay On His Birthday !!

Bigg Boss Saravanan is the talk of the town for his instant eviction from the Bigg Boss show yesterday. Saravanan made his acting debut...