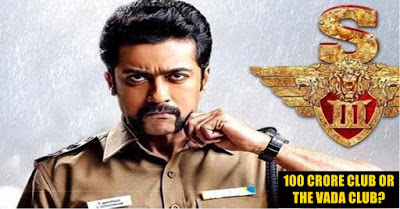 After repeated postponements. the Suriya starer S-3 amidst huge expectations is scheduled to release on February 9th. The announcement has made people, of all Suriya fans really excited after the much hype the movie’s trailer has given.

While the troops of Suriya have been patiently waiting to witness the actor’s mass avatar on screen, an interesting news about the film’s business has surfaced online.

In a recent press meet, the producer Gnanavel Raja has confirmed that the film has crossed more than Rs.100 crore in pre release distribution and satellite rights. He also said that it’s happened only to Suriya after the Superstar Rajinikanth that a film has went on to generate more than 100 crores in pre release businesses alone.

Suriya also spoke to his fans saying how the film etched a name for himself in the Kollywood history. “Singam franchise has given me a unique identity in my 20 long years career,” Suriya reportedly said. He also added that his family feels Singam 3 turned out to be better than the previous parts.
Directed by Hari, Singam 3 is Suriya’s fifth successful collaboration with the director. The film will see Suriya as a fierce police officer Duraisingam. Also starring Anushka Shetty, Shruti Haasan and Thakur Anoop Singh, the film has music by Harris Jayaraj. Meanwhile, Suriya is presently working on his next titled Thaana Serndha Kootam with director Vignesh Shivan. Post TSK, Suriya will be teaming up with director Selvaraghavan for the first time.