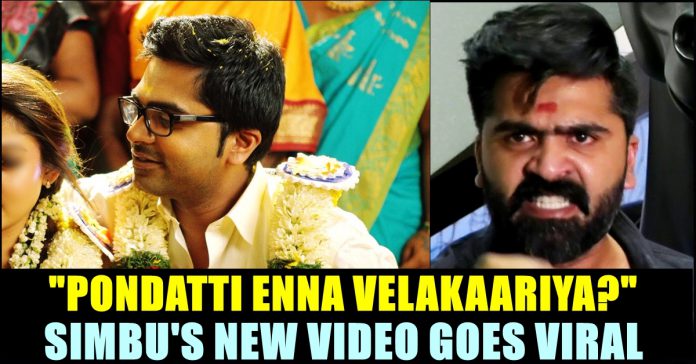 During the first lockdown, a video of Simbu jogging in his home surfaced in Internet and went viral. Now, a new video of the actor cooking in his home has gone viral as soon as it got surfaced. The most special part of the video is, the “Vallavan” actor confronting with VTV Ganesh about how one should treat his wife.

On seeing Simbu sincerely cooking, VTV Ganesh, one of the dear friend of the actor said that there will be no job for the future wife of Simbu as he would cook everything himself. Simbu who had a difference of opinion with the statement of VTV Ganesh, immediately confronted his VTV co-actor by asking “So what ?? That girl marrying me to do services as maid ??” inthe video.

“Do you think marriage partners are maid ?? That is your time. We are not like that. She is coming to support me in my life, you must know how to treat a life partner. To treat her as a maid, I am not someone like you.” says Simbu to VTV Ganesh to teach him a lesson on treating a woman after marriage.

“She will cook if she wish to. She is my wife. I will find ways to make her happy. I won’t trouble her like you” says Simbu to Ganesh. This video is now trending in the micro blogging social media site with an hashtag “Silambarasan TR”. Watch the video below :

New idea:
Simbu should start his own OTT platform just documenting his life as a reality show with 0 edits.
I will cancel my Netflix and Prime subscription and pay money for this instead💰💥#SilambarasanTR pic.twitter.com/390pjRzkuj

Followed by this, one more video is trending in Twitter in which the actor can be seen cooking sincerely.

During the lockdown at #SilambarasanTR ‘s house. And the look is more of like #INA swimming pool scene. pic.twitter.com/Nj3rmYGAmo

In an earlier video we saw the actor running around his home with a fitness watch. The glimpse of the actor made his fans extremely happy as they are worried about his fitness for past few days.

Ok guys here we go finally a video of #STR working out at home Because of lot of requests from the fans! #StayHomeStaySafe #WorkoutsAtHome pic.twitter.com/T70L6jePUo

Before the lockdown announcement, Simbu was actively participating in the shooting of his upcoming film “Maanadu”. The makers of the film such as producer Suresh Kamatchi, Director Venkat Prabhu commenced the shooting of it after so many struggles. After more than one year of the first look release, they couldn’t start the shooting of the film due to the non cooperation of STR.

Producer Suresh Kamatchi complained against Simbu in many public places for not giving proper dates and for not appearing for shoot in the given dates. However, the film went on floors successfully as the “Manmathan” actor nodded in a positive way. The film is expected to go on floors post lockdown.