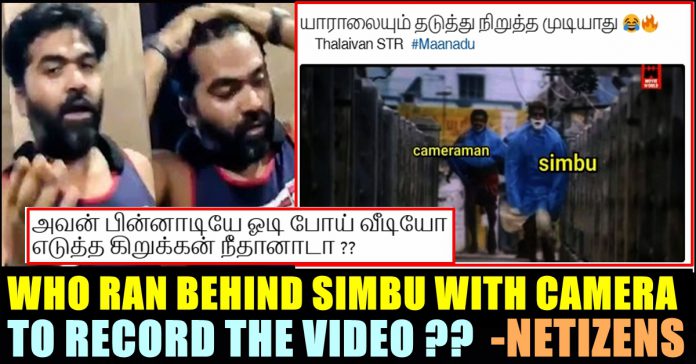 After a very long time, actor Simbu released a video of himself through his dear friend Mahat. In the video we can see the actor running around his home with a fitness watch. The glimpse of the actor made his fans extremely happy as they are worried about his fitness for past few days. Adding the video Mahat wrote “ok guys here we go finally a video of #STR working out at home Because of lot of requests from the fans!”

Ok guys here we go finally a video of #STR working out at home Because of lot of requests from the fans! #StayHomeStaySafe #WorkoutsAtHome pic.twitter.com/T70L6jePUo

As soon as Mahat uploaded this video, it went viral across the Internet with various kind of reactions. After finishing the run, Simbu can be seen pointing out his watch to show how long he ran to keep himself fit. But what popped out in the mind of most of the people who watched the video is, “who could have ran behind Simbu to record this video??” Many guessed it could be Mahat himself and few felt bad for the guy who recorded it by running in the same speed of energetic Simbu’s.

Check out some out some of the reactions regarding the same :

Camera man mindvoice be like, 'you run daw, why me?' 🙈 *insert vadivelu gif* https://t.co/96JdffwQ2o

When you try shrooms for the first time. pic.twitter.com/SrlLgiYjMQ

Before the lockdown announcement, Simbu was actively participating in the shooting of his upcoming film “Maanadu”. The makers of the film such as producer Suresh Kamatchi, Director Venkat Prabhu commenced the shooting of it after so many struggles. After more than one year of the first look release, they couldn’t start the shooting of the film due to the non cooperation of actor Simbu.

Producer Suresh Kamatchi complained against Simbu in many public places for not giving proper dates and for not appearing for shoot in the given dates. However, the film went on floors successfully as the “Vallavan” actor nodded in a positive way.

Now, regarding the lockdown interruption, Producer Suresh Kamatchi said that Simbu is the one who worried so much for the interruption. “Considering the well being of the workers, Simbu is the one who made the decision to postpone” said Suresh. He further added that he won’t give room to Coronavirus to make damage as he didn’t come out of the trauma caused by the India 2 accident.

Now, the actor is currently trying all the ways to keep him fit to appear in “Maanadu” it seems. Comment your views on these recently released video of the actor !!

Previous articleAnupama Parameshwaran Got Irritated On Seeing Her Morphed Pictures !!
Next articleAishwarya Rajesh Finally Replied To Those Who Questioned Her Origin !!

This Contestant Got Evicted From The BIGG BOSS Show !!

An unexpected report surfaced saying that Anitha Sampath got evicted from the Kamal Haasan hosting Bigg Boss show. The buzz came in as a...