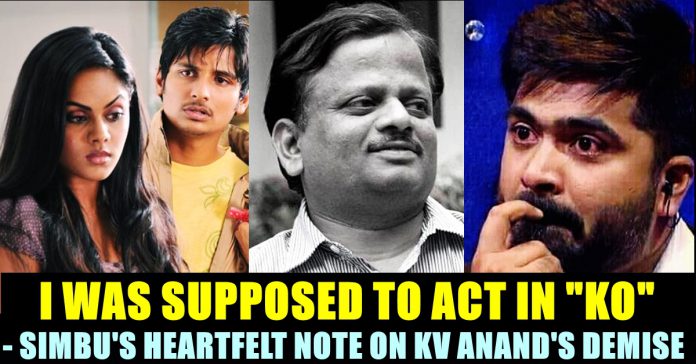 Simbu’s Heartfelt Message On The Unexpected Demise Of K.V Anand !!

KV Anand who started his career as a photo journalist, died of cardiac arrest at the age of 54 in Chennai. After working as a freelance photographer for a leading news papers and magazines such as “Kalki”, “India Today”, KV Anand went on to assist ace cinematographer PC Sri ram in films such as Devar Magan, Amaran, Meera, Gopura Vaasalile, Thiruda Thiruda etc. After working as a cinematographer for a number of successful films, he ventured as filmmaker through 2005 film “Kana Kanden” and went on to make quality films based on chemicals and chemistry.

The filmmaker suffered a heart attack in the wee hours of Friday and passed away at 3 am at a hospital. His last rites took place at Besant Nagar crematorium in Chennai and people were not allowed to pay their last respects as it is a death related to COVID 19 complications, according to Indian express.

Several celebrities from across the film industries of India including Rajinikanth, Kamal Haasan, Mohan Lal, Suriya, Dhanush posted tweets expressing their grief on the unexpected demise of the filmmaker. Actor Simbu released a heartfelt note revealing about a project he was supposed to do with Anand.

“Though deaths are supposed to be unexpected, losing people who were living with good health and unexpectedly losing the one with whom we were talking daily shocks me. K.V Anand is someone who composed nature and I was supposed to act in his “Ko”. Situations of that time forced me to avoid the project” Simbu said in his press note.

“Recently he narrated an excellent story to me and I told him that we will work on it together. We were connected in a daily basis. My heart fails to accept that the one with whom I was talking till yesterday is no more. I was hoping for the news to be a fake one” he got emotional in the note.

“Losing him this soon make me extremely sad. K.V Anand is one of the main filmmakers who came from the department of cinematography. He must have provided several good films. He reached God so soon and his demise is a biggest loss to the film industry. I express my deepest condolences to his friends, family and colleagues. He should rest in the hands of God” read the press note of Simbu. Read : Tamil Cinema Mourns For The Demise Of KV Anand !!

In India, the idea of adopting GST was first suggested by the Atal Bihari Vajpayee Government in the year 2000. The state finance ministers...

Television reality show Bigg Boss Tamil seems to be back with the second season. While there have been numerous speculation on the contestants in the...