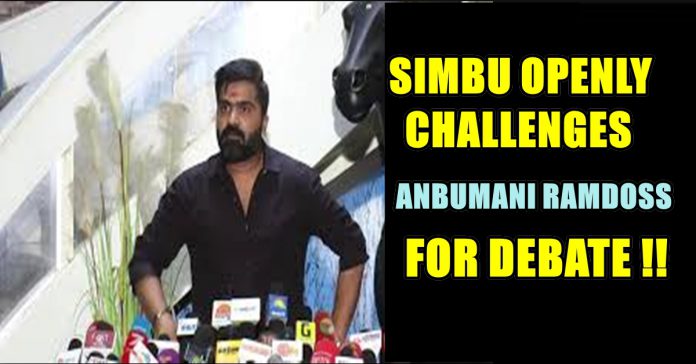 Weeks after controversy broke out over the first-look poster of actor Vijay’s upcoming film Sarkar, actor Silambarasan aka Simbu has challenged Pattali Makkal Katchi (PMK) leader Anbumani Ramadoss for a debate on the smoking issue.

In a video released on social media, actor Simbu expressed concern over the questions raised about why a simple smoking shot is being blown out of proportion. In the 2-minute-long video, the actor said that films such as Rajinikanth’s Baba and Vijay’s Sarkar have been embroiled in such controversies in the past years.

“My views on this will be misconstrued if I speak out in this forum. I invite Anbumani uncle for a debate on this. As a representative of the cinema fraternity, I will answer all his queries in a public forum. I think that is the right way to do it,” he said. Simbu opined that a healthy debate will throw light on the several concerns raised with respect to Tamil films these days and asserted that cinema should be kept away from politics. Earlier, PMK leader and MP Anbumani Ramadoss had slammed actor Vijay for endorsing smoking in the first-look poster. The first look and title of the film were released on June 21, ahead of the actor’s birthday on June 22.

Jason Samuel who accused Gopi and Sudhakar of cheating money through a crowd funding app named "Fundmelon" by uploading a 2 hour 30 minutes...

On 4th of April, Maharashtra government announced a weekend lockdown and restrictions on the movement of people in view of the alarming rise in...

Director Venkat Prabhu Replied To The Comparison Between Tenet & Maanadu !!

On seeing the comparison being made by fans in social media platforms between "Maanadu" and "Tenet" after the teaser of the Venkat Prabhu directorial's...