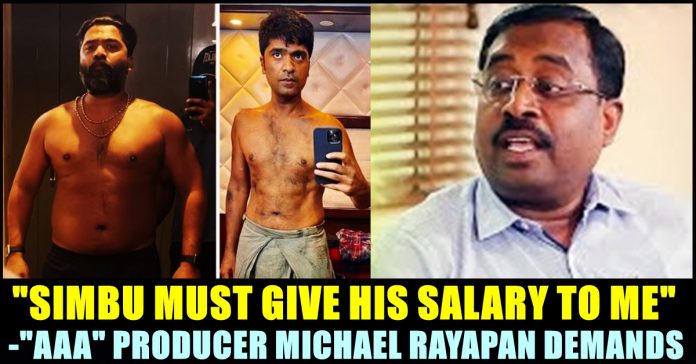 Producer of “Anbanavan Asarathavan Adangathavan” Michael Rayappan appeared in an interaction with a you tube channel and talked about the “Red card” issue that is being faced by actor Silambarasan for acting in “Venthu Thaninthathu Kaadu” of Gautham Vasudev Menon. He said that Simbu didn’t co-operate him during the shoot of “AAA” and failed to attend the shoot which was held at the terrace of his own house. “That film required four characters of Simbu himself. After completing two characters, he said that he will do another film for me without receiving salary and asked me to stop the film and release it” Michael Rayappan said in the interaction.

“I believed his words as he is a top-tier hero. After the film became an utter flop, he called me personally and we planned to conduct a press meet to announce our next film. I don’t know what happened in between. He stepped back and didn’t pick my calls. I complained against him only after 3-4 months” the film producer said who says that his father or mother could have changed his mind.

The film producer says that he wants Simbu to act a film under his production. “I don’t know whether I could do a film with him now. He promised me that he will act in a film for me. Now, Simbu said that he has no interest in acting for my production company. So I want him to give me the salary that he is going to receive for “Vendhu Thaninthathu Kaadu”. It will reduce the burden of the distributors who bought “AAA” film” Michael Rayappan said and added that he is ready to produce a film of Simbu if Producers committee wants him to do so.

Recently, a report emerged saying that “Vendhu Thaninthathu Kaadu” might get red card for the previous commitments Simbu and Gautham Menon had with other producers. It has been reported that Simbu, Gautham Menon and A. R Rahman were committed to do a project as a sequel of “Vinnai Thaandi Varuvaaya” for a production house named All in pictures and an advance amounts were paid to the actor and director at that time.

Simbu and Gautham menon, after working in several other projects, joined hands again for “Vendhu Thaninthathu Kaadu” without completing “Vinnai Thaandi Varuvaya 2”. Shooting of “VTK” is currently taking place at Thiruchendhoor. Now, the producer of “All in pictures” had filed a complaint in producers council seeking solution for the project he initiated with the same combo of ARR-GVM-Simbu, years ago.

“AAA” producer Michael Rayappan also approached producer council to take action against Simbu for the loss he faced while making the Adhick Ravichandran directorial. “Thenandal” Murali who currently leads the producers council made a decision to give “RED card” to the “Vendhu Thaninthathu Kaadu” film. In Tamil cinema, no film should get technical support from Fefsi and other organisations after it receives Red card from the council.

However, technicians who are registered with FEFSI are extending their full support to “Venthu Thanithanthu Kaadu” as the producer Ishari K Ganesh who funds for the film helps the employees of FEFSI workers by providing seats for their children in his college every year, according to reports. Comment your views on this accusations made by Michael Rayappan against Simbu !!

Previous articleA.R Rahman’s Reply To A Fan Who Wanted Him To Act In Films Wins Internet !!
Next articleKarthik Naren Reacted To A Meme That Trolled Him For “Project Agni” !!

Versatile actor Suriya came up with a post in his official twitter handle, expressing his gratitude after winning national award for the first time....

Why Nandan Isolated Himself Despite Of Having No Symptoms Of Corona ?? WATCH

Celebrities with highest fan following are carrying a biggest responsibility on their shoulders at this crucial situation. People are requested to stay in home...