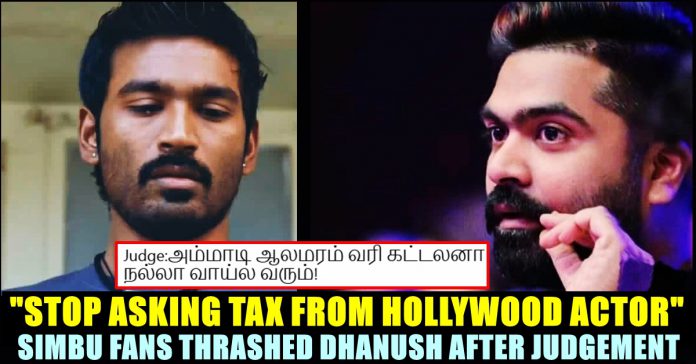 Online fans of actor Simbu are trending a hashtag that says “#வரிகட்டுங்க_தனுஷ்” (Pay tax Dhanush) at national level to defame the pan Indian actor. The “Asuran” actor got condemned by the court for a petition he filed in the year 2015 to waive entry tax on his luxurious Rolls Royce car which was imported from England. Judge Subramaniam of Madras high court who heard the case, condemned Dhanush and ordered Business Tax Department to produce the details on the total amount of Dhanush’s tax amount within the noon of Thursday.

On knowing about the judgement, the hashtag “வரிகட்டுங்க_தனுஷ்” is trending with thousands of tweets and majority of them are emerging from handles which contains actor Simbu’s photo as display picture and last named ending with either “STR” or Simbu”. It is notable that Simbu and Dhanush were considered as rival at one point until the latter actively did films back to back to get recognised nationally. Simbu lost track due to the regular intervals he took from his acting career and most of his recent films became box office dud.

Simbu, after his come back, kept a dialogue in his film “Easwaran” countering the title of Dhanush’s recent film “Asuran” and it instigated a verbal war between fans. However, the announcement of Dhanush acting in a Hollywood project named “The Gray Man” directed by “Avengers Fame” Russo brothers, gained him wide appreciations and recognitions. The actor is expected to share screen space with Hollywood stars Ryan Gosling, Ana De Armas and Chris Evans etc.

Now, on seeing the judgement from Madras high court on Dhanush seeking tax exemtion, fans of actor Simbu started trending hashtag against him and made it trend nationally. “Stop asking Tax from Hollywood actor” read a tweet of an online user named Surya whose display picture showed Simbu. STR Mani uploaded the screen shot of Judge’s one of the statements and wrote “Case Closed” to troll the star.

Followed by actor Vijay, Chennai High court slammed actor Dhanush for seeking tax exemption for his imported Rolls Royce car in the year 2015. Judge who heard the case, reportedly asked “Public who buy things such as Soap, Petrol are paying tax. Why people like you who buy luxurious cars are denying to pay tax ?” to Dhanush.

“In India, there is no separate laws for a common man and actor Dhanush.” said the court and went on to question the actor why he hid his occupation while seeking tax exemption. A formal clarification was demanded by the Chennai High court to actor Dhanush on why he failed to mention his occupation in his petition. The court also directed the Business tax department to produce the details on how much tax Dhanush has to pay before the noon of Thursday.

Judge S.M Subramaniyan who expressed his condemnation over the actor’s deed, denied to accept the plea of Dhanush’s lawyer who wanted to get back his petition on seeking entry tax exemption, says the report. He said that it would have been fair if he (Dhanush) gets his petition back after paying the entire tax and questioned why he is trying to get back his petition when it is being investigated.

Netizens Criticized Nayanthara After Seeing This Recent Video Of Her !! Check Why

After three long years, Nayanthara appeared for a promotional interview for the first time for her upcoming film "Nettrikan" which is going to be...