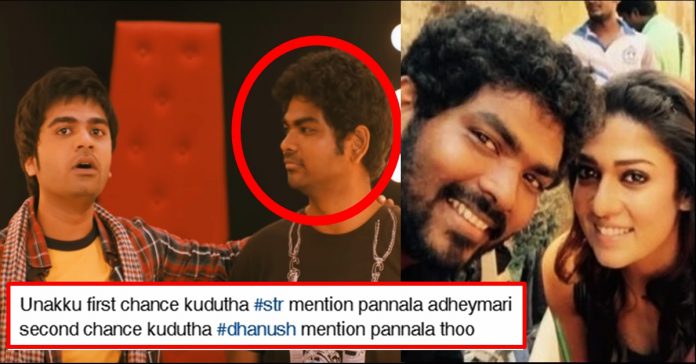 For Celebrating 4 years of “Naanum Rowdy Thaan” film without mentioning actor Danush’s original ID, director of the movie Vignesh Shivan faced the wrath of Danush fans in the comment section of his Monday’s twitter post.

Danush produced “Naanum Rowdy Thaan” through his Wunderbar films and after he intervened in the project, the film got a new shape by having Vijay Sethupathi and Nayanthara in the lead characters. Starting from RJ Balaji to music director Anirudh, the film gave breakthrough for each and everyone who were associated in it. Vignesh, in his twitter post, added Danush’s name with hashtag instead of mentioning him.

Danush fans who got extremeley angry on seeing this gesture from Vignesh Shivan, blamed the filmmaker by saying that he forgot the past and let the people who supported him in his initial stage down. Vignesh Shivan Got Thrashed For Not Mentioning Danush While Celebrating “Naanum Rowdy Dhaan” !!

Now, Simbu fans joined them and started blaming the “TSK” maker for stating “Life started here” in his post as he directed a film called “Podaa Podi” as his debut film. The film had actor Simbu in the lead role and fans of the actor disappointed by the post of Vignesh shivan which made them to fume in the comment section along with Danush fans.

Bro without STR poda podi are you over here ?. Live let live STR way for fan live like the way.

Vignesh Shivan who rose to fame among Tamil audience through directing films like Naanum Rowdy Thaan and Thaana Serntha Kootam is all set to direct his fourth film by having Sivakarthikeyan in the lead. His debut film which is a romantic drama didn’t go well in the box office as it released along with Vijay’s Thuppaki.

What do you think on these reactions received by Vignesh Shivan ?/ Comment your views !!

Previous articleFan Accidentally Booked “Kaithi” Instead Of “BIGIL” & Complained About It !! Here’s How Kaithi Producer Trolled Him !!
Next articlePopular Heroine Regrets For Missing “96” Opportunity !! WATCH VIDEO !!

Music composer Ilayaraja is known to be highly possessive about the music that he has created and does not like anyone using songs composed by him...

Sean Roldan, one of the emerging music directors of South Indian film industry came up with a series of tweets slamming a particular media...

Uttar Pradesh Minister Sanjay Nishad of BJP party stirred controversy after saying that people who live in India must love Hindi language and those...

Lokesh Kanagaraj, one of the most happening filmmaker of Kollywood right now is also made short films before entering Kollywood. Having directed just two...