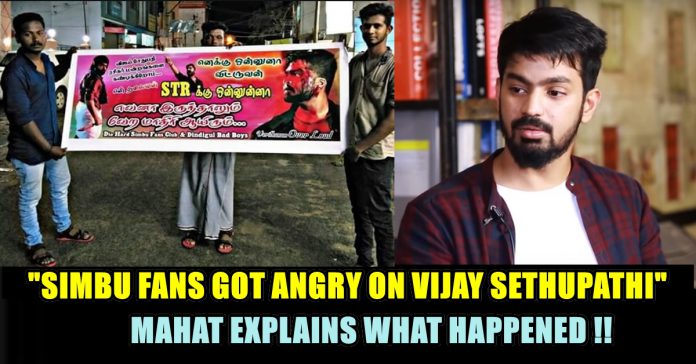 Initially, when everyone in the Bigg Boss Tamil 2 house was in the ‘getting to know each other’ phase, the friendly nature of Mahat was liked by most of the inmates. But as the days went by, Mahat’s temper and his proximity to Yashika came under the scanner. Finally, it was his spat with Mumtaz that got him eliminated last week. Not that this has really deterred the spirit of Mahat, who has come to terms with his faults. “When I came out, I saw people trolling me. I never thought so many people would be shouting at me,” he says, adding, “But still, a considerable number of people were also supporting me. It is a learning for me and I am thankful for this opportunity,” said Mahat when he gave interview to Chennai Times.

When Mani Ratnam makes a gangster flick, it is clear that we have to sit up and take notice, irrespective of how it does at the box-office. The use of guns is not new to Tamil cinema, but the language of bloodshed has changed over the years; the fabric of brutality is not of the same texture anymore. And, this novelty has been in the making for quite a while now.

Now for the first time he gave the video interview to Galatta Youtube channel after coming out of Bigg Boss house. While every contestant were seen in interviews within a week, Mahat took more than 10 days to appear in a video interview.

Mahat Raghavendra is one of the most-talked-about contestants in the ongoing Bigg Boss Tamil 2. More than bouquets, he is received brickbats from the audience. His “love boy image” has done him no good although it is believed that the actor is a strong contestant to enter the last stage of the Kamal Haasan-hosted show. The film CCV is having a good run at the box office, and has also received positive reviews alike. It has Simbu, Vijay Sethupathi, Arun Vijay, Arvind Swami, Jyothika, Dayana Erappa, Aditi Rao Hydari and Aishwarya Rajesh in the lead roles. Meanwhile the climax of the film contains an ending scene in which Vijay Sethupathi will shoot Simbu to kill him. On seeing this some of the fans of Simbu came up with billboards in a note of condemning Vijay Sethupathi as he has killed Simbu in the movie.

The picture is going viral and it says “I will bear whatever happens to me, but if anything bad happens to STR , whoever may done it, they will suffer”

On talking about this issue Mahat said that nothing like this has to do with Simbu fans. Even Vijay sethupathi has said that Simbu is one of a kind. Simbu will be a king of Tamilnadu one day he said. Watch the video here :

Previous articleThis Couple Got Drunk On Honeymoon & Bought An Entire Hotel !! You Will Be Shocked To Know The Amount !!
Next articleS.Ve Shekar Said “Swiggy” Proves Saffron Increasing In Tamilnadu !! Tamil People Shown In No Mercy !!