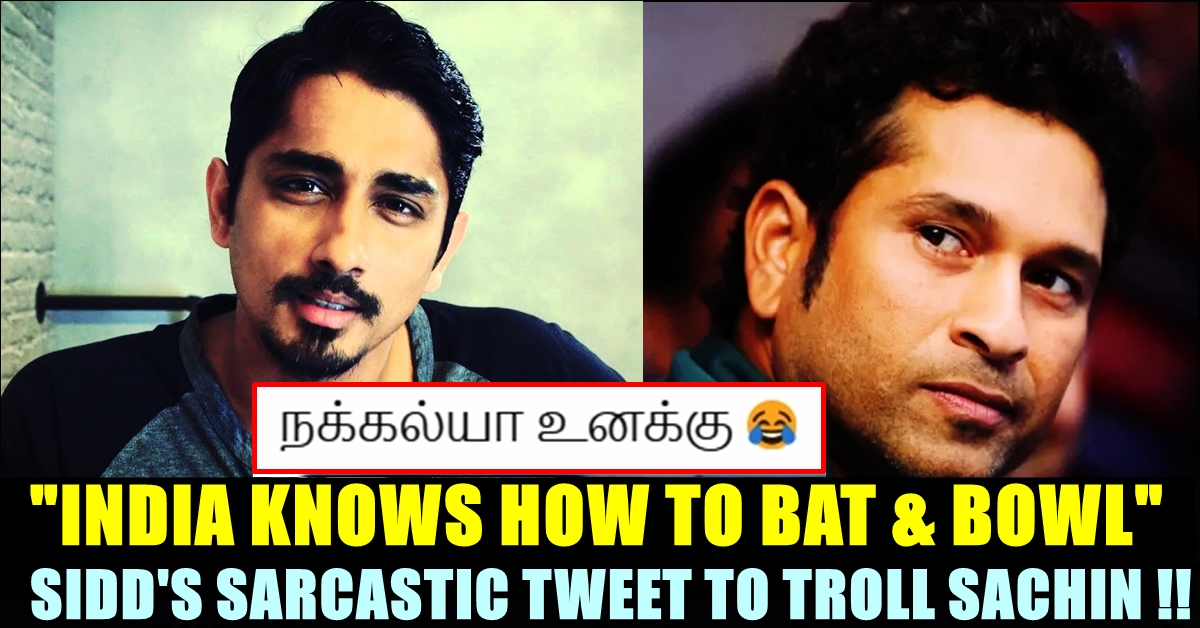 Ever since the tweet of Sachin Tendulkar about the protest of farmers surfaced, it became a subject to severe trolling and criticism across the social media platforms. Many memes and reactions are emerging in Internet after the former cricketer uploaded tweet against the protest being staged by the farmers. Now, actor Siddharth who is known for voicing out against the BJP government for their way of ruling the country, came up with a tweet trolling the Sachin Tendulkar uploaded on Wednesday.

With International stars and personalities giving it a larger voice, the protest being conducted by the Farmers against the central government has got a whole new dimension. After pop superstar Rihanne, Climate change activist Greta Thunberg created a storm in social media. US Vice president Kamal Harris’s niece Meena Harris and former adult star Mia Khalifa also showed support posting tweets reacting to the agitation.

It all started when popular pop superstar Rihanne shared an article regarding the protest with a caption saying “why aren’t we talking about this?! #FarmersProtest”

While many Internet using Indians are welcoming the support farmers are receiving from across the world, some people wanted no outsiders to opine on the agitations that are taking place in country India. Actress Kangana Ranaut openly termed farmers as “terrorists” and called Rihanna as “fool” through one of her several tweets against the pop singer.

Now, to our shock, Sachin Tendulkar who is dubbed as the “God” of world cricket, came up with a tweet denoting that no foreigners should intervene in the politics of India. He said that external forces can be spectators but not participants. The cricketer also believed that Indians know India and should decide for India and influenced his millions of followers to be united as a nation.

India’s sovereignty cannot be compromised. External forces can be spectators but not participants.
Indians know India and should decide for India. Let's remain united as a nation.#IndiaTogether #IndiaAgainstPropaganda

This tweet from the most successful batsman of all time became a troll material among the Tamil nadu based social media users. Now, actor Siddharth, trolling the tweet of Sachin, uploaded a similar tweet addressing the first test match between India and England.

“India is a great country. Eng wants to play against us but our sovereignty cannot be comprised. India knows how to bowl, bat and field for itself, & we hope that an amicable result will be reached within 5 days. We will play with all 11 players. #IndiaUnited #IndiaAgainstEngland” the pan Indian actor’s sarcastic tweet read.

India is a great country. Eng wants to play against us but our sovereignty cannot be comprised. India knows how to bowl, bat and field for itself, & we hope that an amicable result will be reached within 5 days. We will play with all 11 players. #IndiaUnited #IndiaAgainstEngland

This tweet from the actor garnered huge response with various kind of reactions. Check out some of them below :

You just bowled a better yorker than Malinga!

U proved me right I always say South Indian heros are Real heros.

Director Venkat Prabhu Replied To The Comparison Between Tenet & Maanadu !!
Rihanna Got Rs. 18 Crore To Post That Tweet ?? Kanagana Tweets