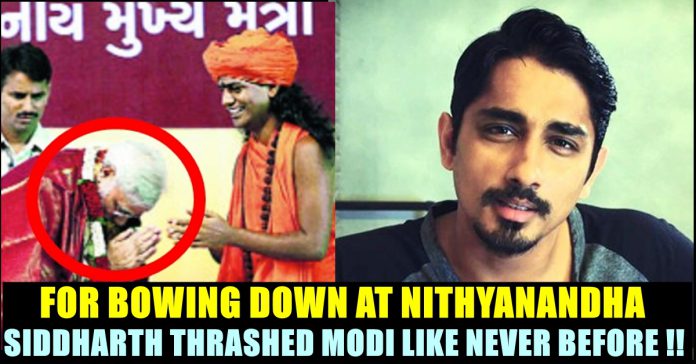 Amidst all the furores that is being created by self-proclaimed Godman Nithyanandha for past few days, few pictures of Prime Minister Narendra Modi greeting him by bowing his head has been surfaced. Despite being one of the most controversial personality, Nithyanandha continues to get followers and devotees.

The controversial figure is wanted by Gujarat Police in a case of kidnapping and wrongful confinement of children at his Ahmedabad ashram. A recent video of the man claiming that no one can touch had gone viral in social media. “I will show my integrity to you by revealing the reality and truth to you. Now nobody can touch me, I can tell you the truth – I am Param Shiva. Understand? No stupid court can prosecute me for revealing the truth. I am Param Shiva,” he says in the video, wearing a rust-coloured turban and robe.

Nithyananda who absconded, has founded a new nation of his own and named it as ‘Kailaasa’. And it has its own “passport”, according to reports. He has also launched a website of the new “nation”, describing it as the greatest Hindu nation on earth. According to unconfirmed reports, Nithyananda has bought an island in Ecuador in central Latin America and has started calling it an independent, new nation.

On Friday, the government cancelled his passport and rejected his application for a fresh one. Foreign Ministry spokesperson Raveesh Kumar also said that it has sensitised all its missions and posts abroad about locating Nithyananda. Asked about reports that Nithyananda has founded his own country, Mr Kumar said, “Setting up a website is different from setting up a nation.”

Now one of a twitter user shared pictures of Nithayananda and Narendra Modi and questioned when the Prime minister of India is going to visit his country. “Wonder when PM Modi will visit the new nation, Kailaasa – he has, after all, enjoyed a long and warm relationship with the nation’s founding president” read the tweet of the user.

Wonder when PM Modi will visit the new nation, Kailaasa – he has, after all, enjoyed a long and warm relationship with the nation's founding president: pic.twitter.com/ty3AH5OPV1

On seeing this post, Actor Siddharth who never shied away to express his political opinion openly bashed the Prime Minister for bowing down for a fraud like Nithyanandha. “Nithyananda is a clown, a fraud and a criminal. Anyone who voluntarily bows their head in front of him needs to get their head examined. Such poor judgement.” he wrote in his tweet.

Nithyananda is a clown, a fraud and a criminal. Anyone who voluntarily bows their head in front of him needs to get their head examined. Such poor judgement. https://t.co/fRMqB7Hm8S

This is not the first time actor Siddharth is posting something against the PM of India. (Read : Siddharth Brutally Trolled Narendra Modi Directly In Public !!)

Previous articleDid Director Atlee Copy This Too ??
Next articleAmudhan Brutally Trolled Pa.Ranjith In His Own Way !!

With Lust Stories, Sacred Games and now Ghoul, Radhika Apte is all over Netflix. Her constant presence in shows bankrolled by the online streaming...

Vijay Sethupathi Got Highly Disappointed On His Own Fans !! Check Out Why !!

Directed by debutant filmmaker Delhi Prasad Deenadayal, Vijay Sethupathi's Tughlaq Darbar has been pegged as a fantasy comedy with dialogues by Balaji Tharaneetharan, and...

Right from distributor Udhayanithi Stalin to Nadippin Nayagan Suriya, many celebrities came up with tweets in their respective social media handles, wishing Simbu and...

As the first and second look posters Thalapathy 63 which is now "Bigil" released, fans of the actor are very much excited to witness...