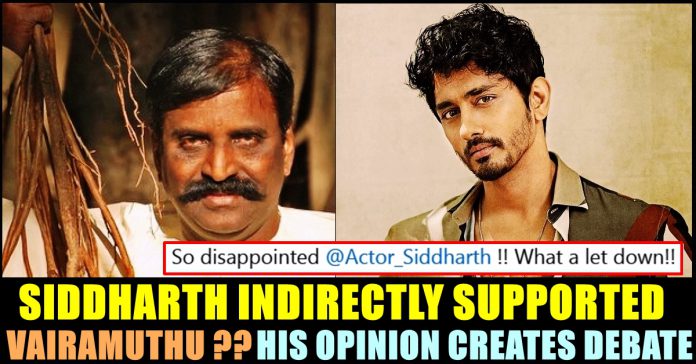 Actor Siddharth, during one of the promotional interviews for his upcoming project “Navarasa”, made an indirect statement on lyricist Vairmauthu in front of actress Parvathi with whom he had shared screen space for his episode in the production venture of legendary film maker Mani ratnam. The actor questioned on whether an individual should abandon the art works made by an artist because he is a bad person or not and concluded that it depends on each person’s self-search.

Singer Chinmayi accused experienced lyricist Vairamuthu of sexually harassing her and alleged that many other girls went through the same. Ever since the accusation was made, both Chinmayi and Vairamuthu are being subjected to controversy by public and by the media. With a set of stretching their supportive hand to the singer, others could be seen supporting the lyricist as well. Many suggested Chinmayi to handle the issue legally, despite of the actress narrating the ordeal she went through while trying to take legal actions against him.

People who support/ appreciate Vairamuthu for the works he did in film industry also started facing the heat due to the allegations that were made against him. Now, actor Siddharth who supported Chinmayi when the issue was raised by her, made an important statement asking whether the art works of Vairamuthu should be hated or not. The actor’s choice of words created a debate in the micro blogging social media site as well.

“Take one legendary poet who wrote many poems in his career. His poems inspired young people to grow, helped people to love each other, made couples to give birth to child, celebrated first nights, looked after their parents, understood about the world. If you come to know that the lyricist is a bad person, would you abandon all the works he did throughout his career ?” Siddharth could be seen questioning, having Parvathy along with him in the virtual interview.

“Would you stop valuing his poems ?” he continued. “Could we separate art and the artist. Did we came to a place where we are ready to give up all the creations of an artist after knowing that he is a bad person ? Every individual should search for an answer for this by himself/herself” Siddharth said. Watch the video below :

Though Siddharth didn’t take any stance in the issue, the way he tried to portray the whole issue made people to disagree and many expressed their support as well. Check out some of the reactions Siddharth’s statement received below :

So disappointed @Actor_Siddharth !! What a let down!!

I dislike this Karthik singer so much..
But I couldn't hate his " Aval Ulagaazhagiye song"… in his voice, I still melt..
I feel guilty..
I could seperate art & artist & adore his voice..which I feel ashamed for adoring such a scumbag! https://t.co/FB7XY5mKsZ

it's easy to say bullshit like this when you're privileged https://t.co/yXOxo2CkbU

😒😡
The art is an extension of the artist, it does not exist on its own- it is not only a personal expression of the artist but it is also a source of income for the artists, ergo they benefit from it as well! Censoring/boycotting the art of an accused abuser is the only way1/n https://t.co/1hLBOYKWII

I spoke the same thing in space a month ago…Yes he is accused but yu just can't stop listening to so many songs he penned …Art takes over the artist in my case 🙏 But future? yes he shudnt get work i agree …. https://t.co/DRYcTizM33

In my humble opinion, art can never be completely separated from the artist 🙂 I don't think it's even possible or fair to do so. https://t.co/i2ft0o80N1

Why are people coming at Siddharth for this? Are you brain dead, the man literally said to decide for yourself, if you can seperate art and artist, you can't go and stop everyone else from consuming the art they once liked. Do what you think is right, for yourself. https://t.co/9VNEgXMO4x

I was thinking in this way few days before😊

His art didn't do any mistake. Still appreciate his art. Can't connect his art with his individual mistake. https://t.co/bLd90ylQu5

Man @Actor_Siddharth bang on!! 100% agreed and thats my stand as well.. Legacy can't be destroyed.. https://t.co/bTzLLnbSva

Actress Said That She Is Another Version Of Nayanthara !! Check Why

Actress Vani Bhojan who is known for her TV appearance as "Sathya" in a serial named as "Theiva Magal", is all set to make...