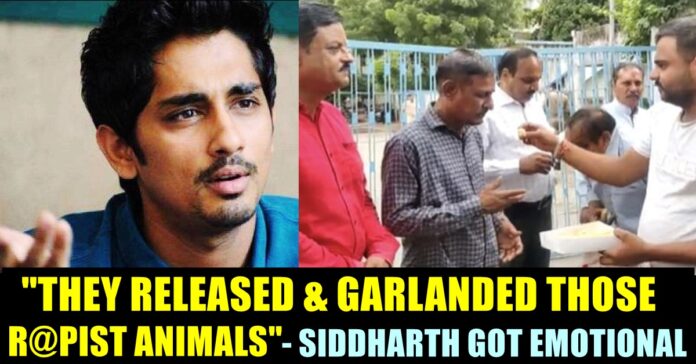 Actor Siddharth, through his Instagram handle, vented his emotions about the release of the 11 accused regarding which many activists has been expressing their displeasure over. The actor called the accused as “rapist animals” and said that nobody in this country are allowed to say they feel unsafe. The “Rang De basanti” artist also mentioned about the country enjoying freedom 75 long years and still continuing to go through such hardships.

Under the Gujarat’s remission policy, eleven convicts who sentenced to life for gang rape and murder in the 2002 Bilkis Bano case walked out from Godhra sub-jail on Monday. The release took place based on the recommendation of a panel set up a few months ago to consider their release under the above mentioned policy.

“The committee had been formed on the instructions of the Supreme Court” Sujal Mayathra, Panchmahal collected said, according to reports. The release order was issued on Sunday. Bilkis Bano, the victim was 21 year old and five months pregnant while she was sexually assaulted on 3rd of March, 2002. She suffered the trauma while fleeing rioting in the aftermath of the Godhra train burning and her three kids were among the victims.

On March 3, the accused took shelter in a field when a mob of 20-30 people armed with sickles, swords and sticks attacked them and Bilkis Bano was gang raped, while seven members of her family were killed. Six other members managed to run away.

On 21st of January 2008, a special CBI court sentenced all 11 accused to life imprisonment. The Bombay high court upheld their conviction for gang rape and murder of seven members of Bano’s family. After over 15 years in Jail, one of the convicted men moved a remission plea in the Supreme Court which directed Gujarat to look into it.

These 11 who are being welcomed with sweets were sentenced for life by the court but released by the govt for gang-raping a pregnant muslim woman, Bilkis Bano during 2002 Gujarat riot. They had also killed her 7 family members, including her 3yr daughter. pic.twitter.com/UqzTed5bbO

Now, a video of the accused getting massive reception with sweets and respect such as “Aarthi”, falling in their feet” surfaced in internet, creating huge outrage among the users of it. “In his independence day speech today, Narendra Modi spoke about empowering women. This evening, the men who brutally gangraped Bilkis Bano during the anti-Muslim Gujarat carnage have walked free. Happy 75 India” a social media user wrote with many others expressing similar emotions.

Along with the public, “They released and garlanded those rapist animals. 75 years and still.. but nobody is allowed to say they feel unsafe in their own country” 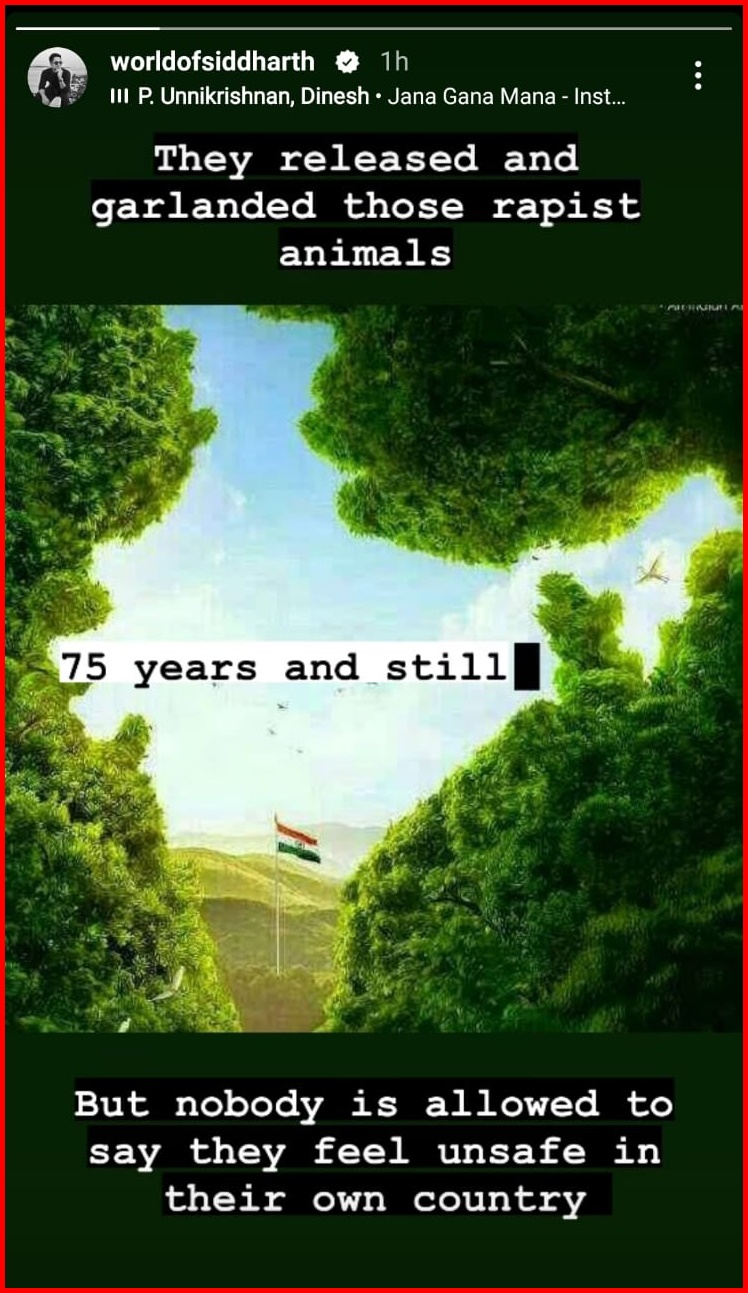 Actress Kasthuri uploaded a tweet in her twitte timeline, saying “This is why capital punishment is necessary and should even be mandatory. It is shameful that convicted gangrapists and child murderers walk free, what’s more disgusting is they are being welcomed with sweets and aarti. When the BJP govt at the center laid down that certain categories such as rape convicts will not receive remission, The state BJP has released these grievous criminals … Is it carelessness or callousness ? Meanwhile Bilkisbanu’s family has not been rehabilitated”

When the BJP govt at the center laid down that certain categories such as rape convicts will not receive remission, The state BJP has released these grievous criminals … Is it carelessness or callousness ? Meanwhile Bilkisbanu’s family has not been rehabilitated.

Many other celebrities such as Poonam Kaur came up with posts condemning the decision of the government.

Previous article“Yuzi Chahal & His Wife Going To Get Divorce” – Public !! Indian Spinner Answered
Next articleRanbhir Kapoor Got Slammed For His “Insensitive” Comment On Alia’s Weight Gain !

Julie Announced About Her Come Back Into The BIGG BOSS Show !! Check Reactions

Julie of Bigg Boss season one fame announced about her come back into the 24 hours version of the same show and the users...

Video Of Chennai Cop Getting Thrashed By Public For Misbehaving With A Woman Goes Viral !!

A three days old video of police constable named Rajiv getting thrashed by public for misbehaving with woman goes viral now. He got arrested...