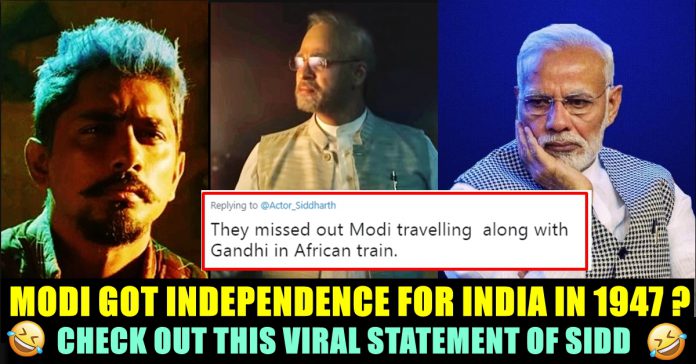 Tamil actor Siddharth took a jibe at the recently-launched trailer of PM Narendra Modi. The Jigarthanda actor took to Twitter to sarcastically point out that the trailer misses out on how Modi won India its independence by “single-handedly wiping out the British Empire.” He ended his dig with the hashtag #IStandWithModi. Actor Siddharth is known to speak his mind, and make his stance clear on political and social issues. Taking a dig at the trailer of Narendra Modi’s biopic, PM Narendra Modi, Siddharth tweeted it doesn’t show how Modi won India’s independence by ‘single-handedly wiping out the British empire. Taking sarcasm to the next level, he wrote: “Looks like another trick by the sickular, libtard, commie, naxals, and of course that Nehru (sic).”

#PMNarendraModiTrailer does not show how #Modiji won India’s Independence by single handedly wiping out the British Empire. Looks like another cheap trick by the sickular, libtard, commie, naxals and of course that Nehru. #IstandwithModi

Siddharth also questioned the integrity of filmmakers who come up with biopics of politicians like ex-Tamil Nadu CM J Jayalalithaa and PM Narendra Modi. In his following tweet, he said,” Seeing the honesty of our film makers when making these “Biopics” like PM Narendra Modi, my mind boggles at how much goldwashing is going to happen in the many #Jayalalithaa based films coming our way. It’s forgivable to not know your history, unforgivable if you try to change it!”

Seeing the honesty of our film makers when making these “Biopics” like #PMNarendraModi, my mind boggles at how much goldwashing is going to happen in the many #Jayalalithaa based films coming our way. It’s forgivable to not know your history, unforgivable if you try to change it!

The two-and-half minute trailer showcases the life of Prime Minister Narendra Modi. Vivek Oberoi, who plays the titular role in the film, manages to get the appearance right. However, the actor is not entirely convincing as Prime Minister. The trailer touches upon the most important events of PM Modi’s life, which includes his association with the Rashtriya Swayamsevak Sangh, his days as the Gujarat Chief Minster and of course, the 2014 Lok Sabha elections. 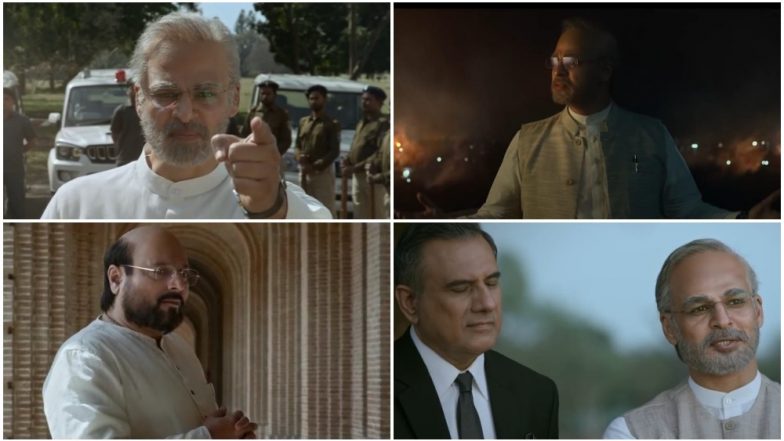 Check out some of the reactions for the tweet of Siddharth :

They missed out Modi travelling along with Gandhi in African train.

The funniest part in between the trailer – surf excel youtube ad 😂😂😂 pic.twitter.com/6uOVsdyCSq

Hey man.. I thought u left film industry..
Do some short movies u will get Chance.

Awwwww you are surprised that one man can do so much …… You cannot even stretch your mind so much so that you have to crack lame jokes after a failed career! 🤣🤣🤣

Thats the plan for sequel!🤣

Siddharth who has acted in Tamil, Malayalam and Telugu films, and also played a key role in Bollywood hit Rang De Basanti, had recently criticised the Narendra Modi government for ‘politicising’ the Pulwama attacks.

Previous articleVairmuthu Voiced Out On Pollachi Rape Case !! Here’s How Chinmayi Reacted To His Statements !!
Next articleJUST IN : Gautham Menon Is Going To Be A Part Of Arjun Reddy Remake “Adhithya Varma” !! Check Out How !!

During the nomination process, Nivisha who was maintaining a close bond with Asal Kolaar, while nominating contestants for eviction, had said that his eviction...

“When Are You Going To Arrest Her ??” Actress’s Frustrated Tweet Goes Viral