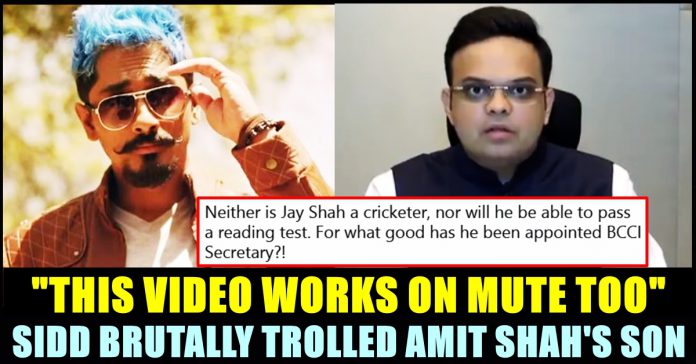 Tamil actor Siddharth who is pretty much vocal about his opinions on Indian politics, sarcastically trolled Jay Shah, son of BJP leader Amit Shah for his English proficiency in a recent video of him in which he appreciated team India for their performance in the ongoing test series that is currently taking place in England. Sarcastically trolling his English speaking ability, Pan Indian actor Siddharth said that the video works on mute too and asked people not to question about his qualifications.

Being a son of Union Home minister Amit Shah and Honorary secretary of BCCI, Jay Shah has been making important statements regarding team India through video. The official social media handles of BCCI has been releasing the videos. He who made the announcement of Dhoni’s inclusion in team India as “Mentor”, also appeared in a video to laud India’s performance in the ongoing test series.

💬 💬 Mr. @msdhoni will join #TeamIndia for the upcoming #T20WorldCup as a mentor.

The announcement from Mr. @JayShah, Honorary Secretary, BCCI, which made the entire nation happy.👍 pic.twitter.com/2IaCynLT8J

It has been reported that Jay Shah was provided a teleprompter to make these announcements but yet his speeches weren’t that smooth. Trolls surfaced targeting Jay Shah for his inability in pronouncing the words of language English fluently. Pan Indian actor Siddharth who predominantly appears in Tamil films came up with a tweet saying Jay Shah is using the latest technology blink controlled teleprompter which is cutting edge.

He sarcastically said that the video works on mute too and added that he doesn’t know why people are commenting on his English. He went to indirectly tell his followers to question the qualifications of the BCCI secretary.

I don't know why people are commenting on his English. This video works on mute too.

Stop judging him on his optics. Next you'll judge him on his qualifications. Be kind. https://t.co/1fBy0z5wiy

Many others trolled Jay Shah citing the same reason. “Neither is Jay Shah a cricketer, nor will he be able to pass a reading test. For what good has he been appointed BCCI Secretary?!” Congress leader Brijesh Kalappa tweeted to troll. Check out some of the reactions below :

What a sweet & innocent boy! He is the boss of BCCI. He is named Jay Shah. Of course there is no dynasty in BJP nor political interference in BCCI pic.twitter.com/jJ5lYvJsLt

Neither is Jay Shah a cricketer, nor will he be able to pass a reading test. For what good has he been appointed BCCI Secretary?! pic.twitter.com/hwkPIJU9rb

I legit laughed out loud at “the video works on mute too”! It does.

True. I checked for his qualifications. But this is the response I got pic.twitter.com/Tn7hQ7pqXo

WATCH : Yash Opened About Competing With “Beast” For The First Time!!

Kannada actor Yash who gained fame across the country through his film "KGF", opened about his film competing with Vijay's "Beast" in the trailer...

Kohli Lost His Temper At A Reporter Who Degraded His Team !! Watch Video !!

The curtains eventually came down on India’s tour of England with the home team winning the last and final encounter at Kennington Oval in London...