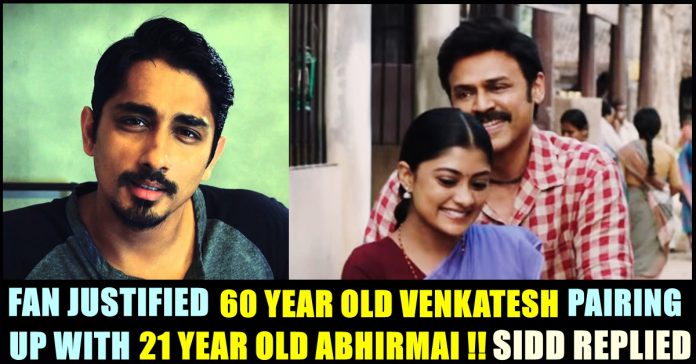 Forty two year old pan Indian actor Siddharth replied to an online fan who trolled him based on his age during a discussion on the pair of Venkatesh and Abhirami in the upcoming “Narappa” movie, official remake of Dhanush’s Asuran. Defending 60 year old actor Venkatesh pairing with 21 year old Ammu Abhirami in the upcoming rural drama, a fan tagged actor Siddharth and askedt whether it is correct to cast 40 years old Siddharth and a 20 years old girl as pair. Replying to him, the “Boys” actor asked why the commenter got remembered of himself when it comes to “Hero’s age” topic and scolded him in a lighter note.

Ever since the trailer of “Narappa” released on youtube, debates are taking place in social media platfors whether it is right to cast Venkatesh and Ammu Abhirami as a pair questioning the vast difference of age between them. The actress is 40 years younger than the senior actor and has acted as his love interest in the movie. Though the movie shows Venkatesh as a middle aged man, his real age irked a number of online using cinema fans.

Here’s the lyrical video song from “Narappa” which features Venkatesh and Ammu Abhirami :

Reacting to the verbal spat that took place between the fans, a Twitter user uploaded a tweet in Telugu saying that it looks senseless to argue on the “Narappa” issue.

On seeing himself getting notified with the commenter’s tweet, Siddharth came up with a reply asking why he got reminded of in this “Hero Age Topic”. “You even tagged me ? Where do you even come from ?” Siddharth asked humorously.

One more user trolled Siddharth based on his age saying that Prakash Raj and himself were class mates.

Replying to him, the actor sarcastically said that Prakash Raj is his adopted son he was a class mate of senior most actor Mhan babu who recently appeared in Suriya’s “Soorarai Pottru”. “Please get your facts straight.” Siddharth trolled back.

Siddharth who debuted to film industry through Shankar’s “Boys”, made his face recognized across the country through his works. Predominantly working in Tamil films, Siddharth’s works in Telugu film industry speaks volumes as well. On the work front, Siddharth is all set to appear in a multi lingual film “Maha Samudram”, “Shaitan ka Bachcha”, “Takkar” and “Indian 2”.

Previous article“My Son Lost All His Memory But Remembers Only Vijay” – Veteran Actor Nassar
Next articleA Set Of People Celebrated The Demise Of Photo Journalist Danish Siddiqui !! Got Thrashed

As the BJP inched closer to a majority in the Karnataka election results, a desperate Congress made an open, unconditional offer to HD Deve...

"Sellur" Raju of AIADMK, in a press meet, trolled DMK's Senthil Balaji for the recent statement he made on squirrels causing power cut in...