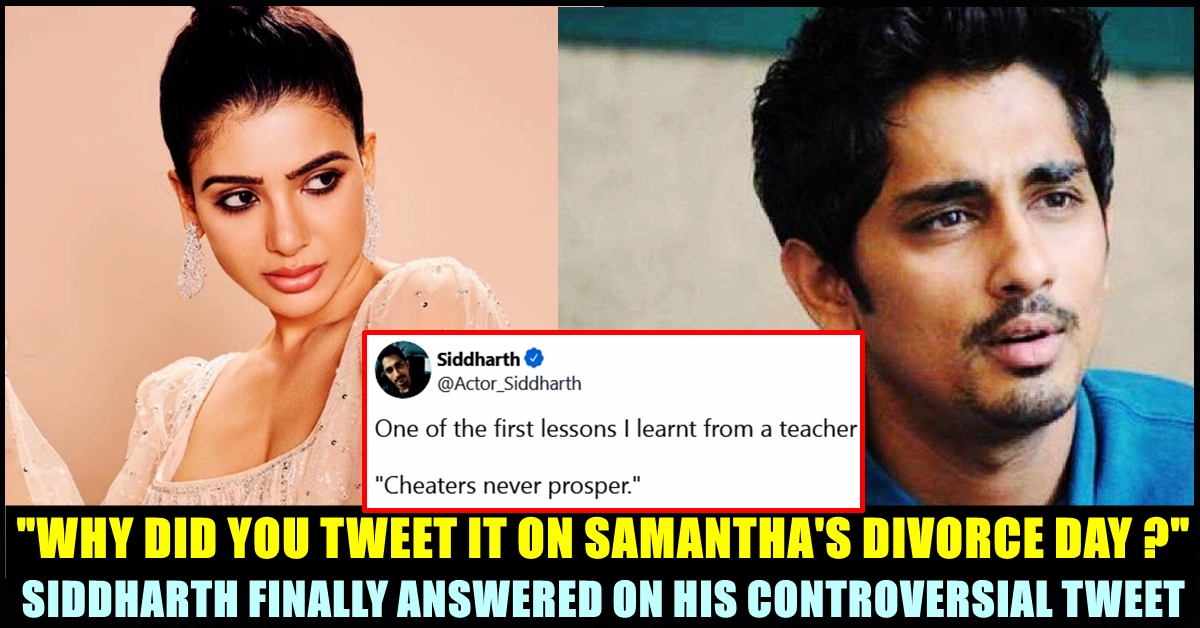 Pan Indian actor Siddharth who is pretty much busy promoting his upcoming Telugu film “Maha Samudram”, during an interview, opened on the recent tweet he uploaded after the divorce announcement of actress Samantha Ruth Prabhu. The actor said that his tweet doesn’t have anything to do with Samantha’s issue but regarding one of his upcoming film’s dialogue. The actor also expressed his displeasure over people not bothering about his other tweets which is about the issues he is facing.

Actor Siddharth’s tweet which surfaced right after Samantha and Chay announced about their divorce going viral among the users of social media platforms. With many criticizing the 42 year old actor saying that he is indirectly taking dig at Samantha with whom he allegedly had a relationship prior, a number twitter users are supporting the actor as well. Reports says that Samantha and Siddharth were in relationship for two and half years. They both acted in a film named “Jabardasth” which got released in the year 2013.

Many celebrities and fans have been reacting to the news in various ways. Meanwhile, actor Siddharth who allegedly had a relationship with the actress during a phase, came up with a tweet writing, “One of the first lessons I learnt from a teacher in school… “Cheaters never prosper.” What’s yours?” in his tweet. Check out his tweet below :

Now, during one of the promotional interviews for his upcoming film “Maha Samudram”, an interviewer asked the actor about his tweet. Answering to him, Siddharth said “I have been tweeting for 12 long years, no one questioned anything about it. If I complain about the dog problems I have been facing, people ask why are you calling me as “dog” ? what can I do about it” Siddharth said, while answering to the reporter.

When the reporter said that Samantha’s divorce announcement was made on that day, Siddharth said “I will talk about life myself. I don’t have any connection with the said matter. At that day, while talking to my director, he said that the theme on “cheaters” exists in our film. I shared about what my teacher said. That was the tweet made while discussing about the same. What can I do if all the cheaters in the world get offended because of that” he asked.

Most recently, Samantha released a press note writing “Your emotional investment into a personal crisis has overwhelmed me. Thank you all for showing deep empathy, concern and for defending me against false rumours and stories that are being spread. They say I had affairs, never wanted children, that I am an opportunist and now that I have had abortions.”

JUST IN : This BIGG BOSS Contestant Walked Out Of The Show !!
“Even My Mum Wouldn’t Have Voted For Me” – Mumbai Player’s Tweet Goes Viral