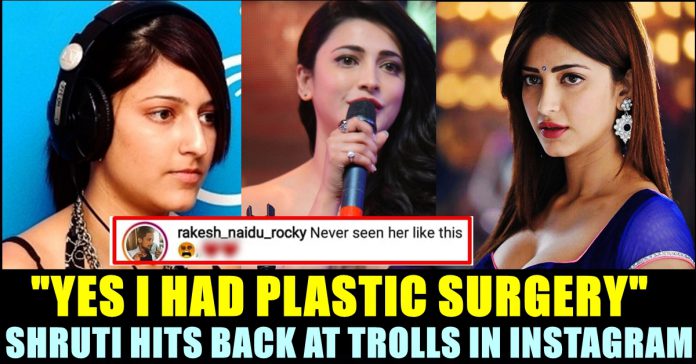 Shruti Haasan’s Bold Reply To Those Who Commented On Her Physique !!

Shruti Haasan has came up with an Instagram post explaining how important self love is. Being a daughter, India’s popular iconic celebrity, Shruti Haasan earned herself a name through sheer hard work. She happens to be one of the most active celebrities in social media platforms as well. Having more than 1 crore followers in Instagram, Shruti never missed to update her photos from her various photoshoots.

After appearing in couple of her father’s films as child artist, Shruthi Haasan made her Tamil debut as heroine 7 aam arivu and continued to act in film films like 3 with Dhanush and Vedhalam with Ajith Kumar. Shruthi who has posted 1697 posts in Instagram, today posted a picture of herself sitting on a floor like surface by wearing violet color tee.

Uploading the pictures, the 34 year old actress wrote “Whoever is delighted in solitude is either a wild beast or a god “

Among her 1.3 crore followers, few of them body shamed the actress by alleging she is looking so lean. Some of them asked her to eat well to gain weight as well. Check out some of their comments below :

Shruthi who became aware of these comments, immediately replied to them posting another picture of herself with and without makeup. In the post Shruti stated the reason behind why she is uploading the post after her previous post.

Shruthi said that she is not the one who gets driven by the comments of people but their comments on her posts such as “she’s too fat now she’s too thin” is so avoidable, the actress said. Shruthi further said that she is trying hard to have healthy relationship with her hormones. The actress said that the pain she is going through is easy but feels alright to share her journey in her social media accounts.

Judging another person is not cool, says Shruthi in her post. She goes on to admit that she had a plastic surgery and says that it is the way she chose to live. The actress suggested her followers to spread love and be chill. “I’m learning everyday to love me for me just a little more because the greatest love story of my life is with myself and I hope yours is too :)” she wrote in her Insta post.

So …. I decided to post this right after my previous post and I’ll tell you why. I’m not one driven by other people’s opinions of me but the constant commenting and she’s too fat now she’s too thin is so avoidable. These two pictures have been taken three days apart. I’m sure there are women out there who relate to what I’m going to say. Most often I’m at the mercy of my hormones mentally and physically and over the years I work hard to try and have a healthy relationship with it. It isn’t easy. The pain isn’t easy the physical changes aren’t easy but what’s become easier to me is to share my journey. No one famous or not is in a position to judge another person. Ever. That’s just not cool. I’m happy to say this is my life my face and yes I’ve had plastic surgery which I’m not ashamed to admit. Do I promote it ? No am I against it ? No – it’s just how I choose to live. The biggest favour we can do for ourselves and others is just be and learn to accept the changes and the movement of our bodies and minds. Spread love and be chill . I’m learning everyday to love me for me just a little more because the greatest love story of my life is with myself and I hope yours is too 🙂

On the work front, Shruti is going to star in “Laabam” directed by S.P Jananathan along with actor Vijay Sethupathi. Comment your views on this sharp answer to trolls !!

Naveen Muralithar is popularly known for his participation in Vijay Televison program Kalaka povathu Yaaru. Being one of the leading mimicry artist in town...