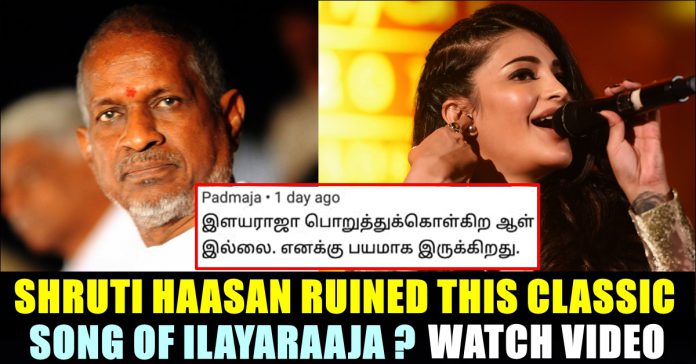 Shruti Haasan who is also quarantined due to Corona outbreak, released a music video in her official Instagram account in which she can be seen recreating her father’s classic “Thenpaandi Cheemayile” from “Naayagan” movie. That particular video disappointed a particular set of people who are accusing the actress by saying that she ruined the classic and compared it to the recent remix of A.R Rahman’s “Masakali” which is facing the wrath of music lovers across the nation.

Being a daughter, India’s popular iconic celebrity, Shruti Haasan earned herself a name through her sheer hard work. She happens to be one of the most active celebrities in social media platforms as well. Having more than 1 crore followers in Instagram, Shruti never missed to update about daily routines, in a way of engaging her followers.

After appearing in couple of her father’s films as child artist, Shruthi Haasan made her Tamil debut as heroine 7 aam arivu and continued to act in film films like 3 with Dhanush and Vedhalam with Ajith Kumar. Shruthi who has posted 1752 posts in Instagram, recently came up with a music video. In the video we can see her singing the song “Thenpaandi Cheemayile” in western style by playing piano. Adding the video, Shruti wrote “Thenpandi cheemayile, I’ve always loved this song 🖤” as her caption.

The song which was originally sung by Ilayaraja, is one of a song which still acquires a separate place in the hearts of the legendary musician’s fans. Though many of her followers lauded the effort of the actress, few felt that she is ruining the original and compared it with Masakali 2.0. “If Ilayaraja has a Twitter he would have come up with a tweet like Rahman” said one of a twitter user. (Also Read : A.R Rahman Got Frustrated Like Never Before For Remixing His Song !!)

A team of a director, a composer, and a lyricist supported by actors, and a relentless crew” nu sollirpaaro??? https://t.co/40Fmlfgehn

This is the most beautiful ‘murder’ I’ve ever seen❤️🙄

Pathetic, better to hear a hyena howl.
The kind of things star kids get away with !

Shruti Haasan entered Tamil film industry through her father’s “Unnai Pol Oruvan” as a music director. She earned filmfare award for singing “Kannazhaga” song in her film “3” and sung number of songs for various music directors. But recreating a classic song which has emotional bonding with millions of people ?? As Rahman said “It’s holy to the people” and it should be left alone.

Previous articleGuy’s Obscene Comment Shriya’s Post Made Her Husband To React !!
Next articleJUST IN : Ajith Called Vijay Personally To Know About Sanjay !!

Director Vignesh Shivam presumably replied to all the rumours and speculations about himself being opted out from project AK 62 in an indirect way....