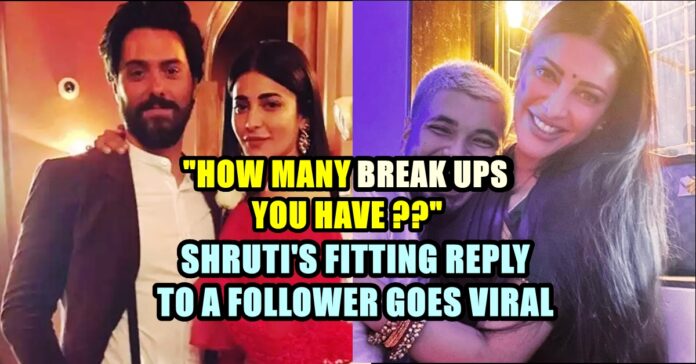 Tamil nadu based South Indian actress Shruti Haasan who is fond of conducting question and answer session with her Instagram followers, replied to a fan who asked about how many break ups she had done in her life so far and made it to the headlines. Shruti, in reply, asked the follower to tell how many girl friends he have and guessed the number to mock the follower back.

Being a daughter of India’s popular iconic celebrity, Shruti Haasan earned herself a name through sheer hard work. She happens to be one of the most active celebrities in social media platforms as well. Having more than 1 crore and fifty lakh followers in Instagram and 70 lakh plus followers in Twitter, Shruti never missed to engage her followers by uploading pictures from her photo shoots and by conducting chat sessions with them frequently.

After appearing in couple of her father’s films as a child artist, Shruthi Haasan made her Tamil debut as heroine 7 aam arivu and continued to act in films like 3 with Dhanush and Vedhalam with Ajith Kumar. She is also acting in other language films, mainly in Telugu. On  31st of December, Shruti Haasan conducted a chat session writing “Ask something, the last of 2021, weird questions only” to her followers.

One of her followers asked how many breakups she has in her life and the replied back to him saying “How many girlfriends have you had, I am guessing zero or maybe half” in a different tone to mock him.

Shruti who was in a brief relationship with a London based actor Michawl Corsale, broke up with him and is currently involved in a romantic relationship with doodle artist Santanu. While talking about her relationships in a recent show, Shruti said that she wanted to hide her relationships in the past. “I hid a lot in the past. I have been very particular. I have been like “Oh my God, I am totally single for a longest time”. Because [people were like “you have to appear that way, you have to appear desirable, available” Shruti said and also added about how she changed her mindset about revealing a relationship.

“And one day, I was like “For whom ? For what ? I also felt like it was disrespectful to my partner to hide it. It may or may not work out, we do not know but it’s important to respect your environment and the people in it” Shruti Haasan said.

Previous article“Premam” Director Got Devastated About This Fake News About Him !!
Next articleBank Officer Killed His Own Family Members & Committed Suicide !! CHENNAI SHOCKER

After actress Anaika Soti of "Kaaviyathalaivan" fame came up with a question asking her followers to reveal their "deepest darkest secrets", she happened to...