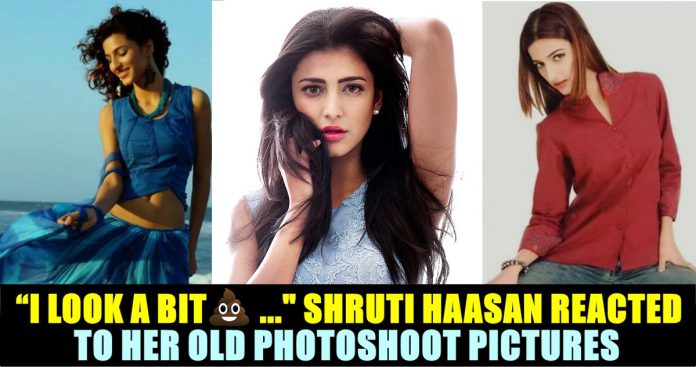 With more than 17 million followers on Instagram Indian actress, Shruti Haasan is very much active on her social media platforms. On Sunday (29-08-2021), Shruti posted her first-ever modelling pictures on Instagram taken back to her memory line.

The Indian actress and playback singer Shruti Hasan actively posts some funny photos and videos on her Instagram page. On this note, she shared her throwback pictures from her initial modelling days. She revealed that her first modelling gig came when she was 17. She shared a series of photos that shows her wearing different clothes.

Shruti Haasan is the daughter of actor-politician Kamal Haasan. She began her career in the music industry by singing the track Potri Paadadi Penne for her actor father Kamal Haasan’s film Thevar Magan. She was just 6 then. She went on to sing several songs for her father’s films, including Chupadi Chupadi Chaachi for Chachi 420, Ram Ram Hey Ram for Hey Ram and Allah Jaane, Unnaipol Oruvan and Vaanam Ellai for Unnaipol Oruvan.

Shruti Haasan shared her teenage photographs captioning as, “Mind blown when I found these – my first ever modelling gig at 17! I look a bit shitty and a bit star but that’s like life isn’t it. I’ve always loved working and growing, even sideways #memories #flashback.”

In the first picture, Shruti can be seen wearing a white kurta with red detailing on it. Her outfit was paired with a choker necklace. In the second photo, she can be seen by the beachside wearing a blue dress. The third picture has Shruti posing in a red kurta and blue jeans while in the fourth one she is seen in a black top with a white skirt.

In those pictures, Shruti looks younger being in her teenage. Before this post, she had also shared some more of her old pictures. Recently she shared her picture clicked at her 21 years. The caption read as, “What was I thinking ?!!!🤣 found this from when I was 21 and basically thought anything goes -wait does that mean I still haven’t grown up ??? 🤪”

Here comes the other post of 12 years ago. The caption read as, “12 years ago today – I had no idea what I was getting into 🙂 all I knew was that I liked it and I wanted to get better everyday – I still feel that way 🙂 a LOT has changed and for that I am so grateful 🙏 Thankyou for all the love and support .. I have a special place in my ♥️ for you .I feel blessed truly 💖onwards and upwards -everyday feels like a new journey has just begun”

Check below for the reactions to her teenage pictures.

Previous articleFans Attacking Jimmy Neesham For Mentioning About India’s Population !!
Next articleTv Actress Sameera Replied To The Followers Who Advised Her On Her Pregnancy!!