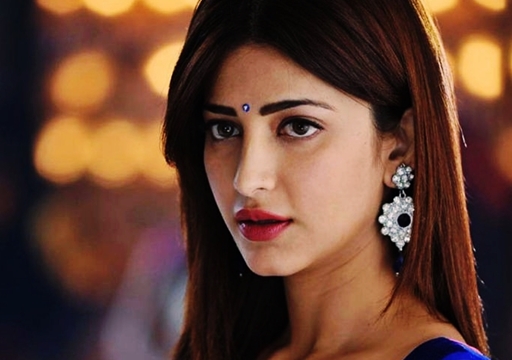 South Indian actress Shruti Haasan reacted to a report that said she got married to her long time boyfriend Santanu. The actress brushed off the rumour saying that the report of India Today is just a click bait through her official Twitter handle. For past few days, a number of leading media portals has been quoting an alleged statement of Santanu through which he said that already got married to Shruti.

According to India Today, when he was asked whether he is thinking of taking his relationship with Shruti Haasan to the next level, the Doodle artist, said that he already got married to the actress “creatively”.

“We are already married creatively. This shows how strong our bond is. We are creative people who love to do creative things together. That is very important for us. When it comes to marriage, I don’t know about that. Let’s see how things go” he reportedly said. 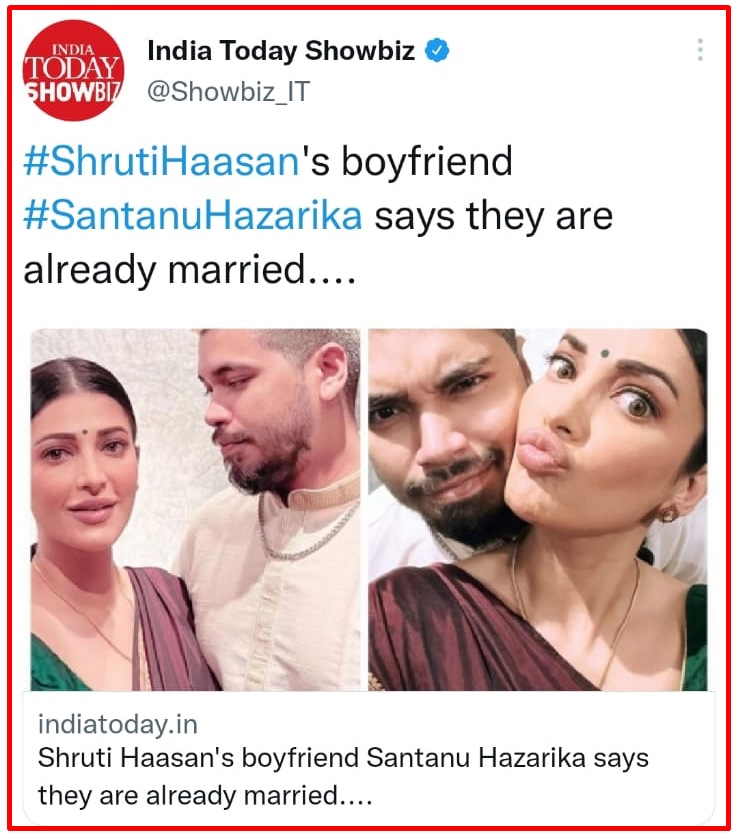 Though Santanu didn’t confirm anything about his marriage with the “3” actress, India Today came up with a headlines saying “Shruti Haasan’s boyfriend Santanu Hazarika says they are already married”. Not only India Today, many other media portals came up with similar headlines.

In a way of brushing off all such rumours, Shruti Haasan tweeted through her official twitter handle conforming that they are all “click baits”. “Click bait virus … seriously guys come on 😂😂😂😂” read the actress’s reply to “India Today Showbiz”

Being a daughter of India’s popular iconic celebrity, Shruti Haasan earned herself a name through sheer hard work. She happens to be one of the most active celebrities in social media platforms as well. Having more than 1 crore and fifty lakh followers in Instagram and 70 lakh plus followers in Twitter, Shruti never missed to engage her followers by uploading pictures from her photo shoots and by conducting chat sessions with them frequently.

After appearing in couple of her father’s films as a child artist, Shruthi Haasan made her Tamil debut as heroine 7 aam arivu and continued to act in films like 3 with Dhanush and Vedhalam with Ajith Kumar. She is also acting in other language films, mainly in Telugu.

Shruti who was in a brief relationship with a London based actor Michawl Corsale, broke up with him and is currently involved in a romantic relationship with doodle artist Santanu. While talking about her relationships in a recent show, Shruti said that she wanted to hide her relationships in the past. “I hid a lot in the past. I have been very particular. I have been like “Oh my God, I am totally single for a longest time”. Because people were like “you have to appear that way, you have to appear desirable, available” Shruti said and also added about how she changed her mindset about revealing a relationship.

“And one day, I was like “For whom ? For what ? I also felt like it was disrespectful to my partner to hide it. It may or may not work out, we do not know but it’s important to respect your environment and the people in it” Shruti Haasan said.

Months ago, an indirect tweet of music director Hip Hop Tamizha, referring to a group of stand of comedians created a controversy. Now, Jagan...

Actress Aishwarya Rajesh who is predominantly appearing in Tamil movies, conducted a chat session with her followers and answered to the questions asked to...