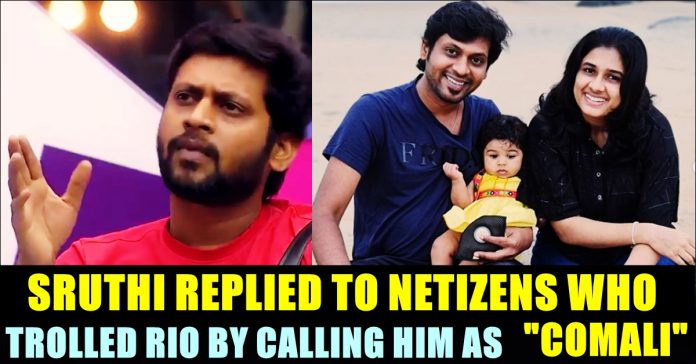 Sruthi, wife of Bigg Boss contestant Rio came up with a social media post replying to the trollers who trolled the “NNOR” actor by calling him as “Comali”. She said that “Comali” is a most prestigious title to an entertainer like Rio. Since entering Bigg Boss house, Rio is facing severe trolls and criticisms from the fans and followers of the Kamal Haasan hosting show. Sruthi who entered the house during Freeze task gave him some suggestions and wished him the best to play well. Now, on seeing people trolling Rio by calling him as “Comali”, Shruthi came up with a post in her official social media accounts.

Rio raj who started his career in media industry as an anchor, debuted as a protagonist in a Tamil film named “Nenjamundu Nermayundu Odu Raja”. The film was produced by actor Sivakarthikeyan under his own banner. As his second film “Plan Panni Pannanum” is awaiting for theatrical release, Rio entered Bigg Boss house as a contestant. The reality game show which is being hosted by “Ulaganaayagan Kamal Haasan”, had himself and 14 other celebrities as contestants. The show is nearing its end and Rio became one of strong contender for the title.

The TV anchor is facing both love and hatred from the followers of the 100 days show. Now, on seeing her husband being trolled by netizens, Shruthi uploaded a post in her Instagram and Twitter account. “Comali is the most prestigious title to an entertainer. Actually having fun and making someone Laugh isn’t really easy. To those saying Rio as Comali you guys indirectly praising his humour sense! True entertainer. Spread love and positivity Shine beyond hatred” Shruthi wrote in her post.

“I see some comments that try to defame him by saying comali. I’m actually glad! I’m proud to love someone who does his best to make others laugh even while hiding his pain! You shine beyond hatred my dear! Remain a comali. Be an inspiration! #weloverio” her caption in Twitter read.

I see some comments that try to defame him by saying comali. I’m actually glad! I’m proud to love someone who does his best to make others laugh even while hiding his pain! You shine beyond hatred my dear! Remain a comali. Be an inspiration! #weloverio pic.twitter.com/kq0VyeBnrQ

When Shruthi entered the Bigg Boss house during freeze task, Rio got extremely emotional and broke down. They both hugged each other and Rio kept on apologizing to her for taking the decision of entering the house and for staying away from her for this long.

Shruthi, asked him not to cry and expressed her affection towards him by saying that she started loving him more now. Further Shruthi imitated Rio and made the entire house laugh. She advised him to be like the Rio of “Freeya vidu” times which is a show that telecasted in Sun music where Rio would interact with the viewers casually irrespective of their impulsive questions. Rio Raj and Sruthi got married in the year 2017 and the three year old couple having an adorable daughter named Rithi.

Rio’s wife is such a positive cute kid

On Friday, the AIADMK led Tamil nadu government has announced waiver of Rs. 12, 110 crore farm loans that was received by 16.43 lakh...