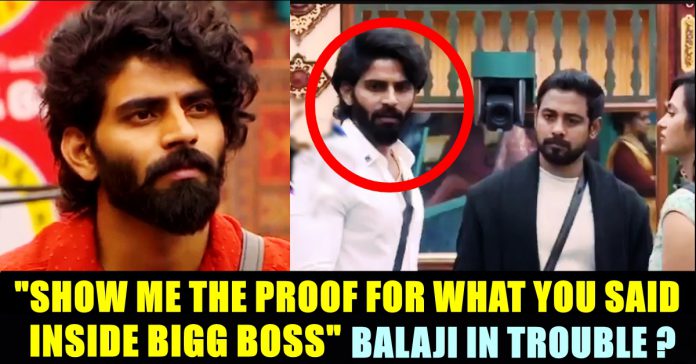 Responding to a meme posted by the fans of Balaji Murugadoss, Joe Michael who called out the runner up for a statement he made inside the Bigg Boss house, has came up with a tweet demanding Balaji to show proof on what he said. He trolled the fans and also tagged producer Ravindran, Music composer James Vasanthan and youtuber Ahmed Meeran and asked them to be careful in a sarcastic way.

Balaji Murugadoss, one of the most talked about contestants of the Bigg Boss show, was having issues not only with his co-contestants but also with a franchise owner named Joe Michael for making derogatory comments against his company while having a verbal spat with Sanam shetty.

In a letter, Sanam wrote to Bigg Boss during a task, she said that Balaji used the words “Adjustment/Compromise” to defame the beauty pageant title she received. “Used the words “Adjustment/Compromise” against a beauty pageant which I am the title holder of. This was without facts on basis of anonymous 3rd party reference was a huge” wrote Sanam in her letter. Though Vijay TV deleted the promo, the letter went viral across the social media platforms.

Now, Joe Michael came up with a tweet asking Balaji to show the proof for what he said inside the Bigg Boss house. Replying to meme which compared Balaji to Lion, Joe added the pictures of himself sending the legal notice to his personal number.

Here are the pictures added by Joe Michael :

Earlier, Joe Michael who owns the company, issued a legal notice demanding an apology or to pay compensation of rupees one crore.

After coming out of Bigg Boss house, Balaji became active in social media platforms and is interacting with his fans through posts and personal messages. He thanked his fans for backing him up when his own friends betrayed him when he was staying inside the Bigg Boss house.

He received 6 crore votes from the viewers of the show, said Kamal Haasan during the finals. Having 3 lakh plus followers in the photo posting social media site, Balaji came up with a couple of posts for his fans and followers.

“I only asked my fans to give milk to people in large vessels, I did not asked them to waste milk on my banner,...