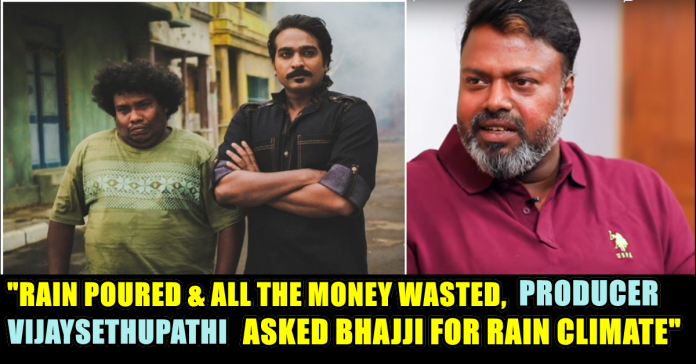 Director Gokul’s upcoming film Junga is all set to hit screens on July 27. The crew made the announcement with a quirky video, confirming the release date. Junga stars Vijay Sethupathi, Sayyeshaa and Madonna Sebastian in lead roles. The film also has Saranya Ponvannan in a supporting role. Apart from playing the lead in the film, Vijay Sethupathi is also co-producing the film. Talking at a recent media interaction, Vijay Sethupathi said that he only knew one line of the script when he agreed to co-produce the film. “I had more faith in director Gokul than the script,” said the actor. The duo has earlier worked in Idharkuthane Aasaipattai Balakumara before. Gokul also helmed Kaashmora starring Karthi and Nayanthara.

Sethupathi further added, “Gokul and I think similarly, so we decided to work together again after Idharkuthane Aasaipattai Balakumara. But what really surprised me was Arun Pandian’s move to fund our project without even listening to the story. Arun Pandian told me that he is impressed with my story selections in the past”.

Director Gokul admitted the budget is on the higher side but Vijay Sethupathi eased his anxiety by co-producing the film. “Junga will have everything that people expect from Vijay Sethupathi. I have been observing what his fans enjoy and have added all that in Junga. A comic sequence of about 8 minutes will be a highlight,” he said.

Junga is said to be a light-hearted film about a don. Several parts of the film have been shot in France and other countries abroad. Apart from Vijay Sethupathi, Madonna, Saranya Ponvannan and Sayyeshaa, the film will also star Suresh Menon and Yogi Babu. In an interview to Cinema Vikatan , director Gokul talked about the trust Vijay Sethupathi had on him. “The level of confidence Vijay Sethupathi kept on me is something me don’t have on myself. Vijay Sethupathi didn’t even listened to the story of the film. Vijay Sethupathi is one of the best friend of mine in cinema industry. We don’t meet each otheroften but he exactly knows what i want and i know what he can give as far as performance is concerned. My only pressure while working on the film was the confidence level of Vijay Sethupathi has on me. While in shoot unexpectedly it rained. According to our source they said it will never rain there in France , but it rained to our shock. Shoot was stopped and I’m starring at the rain. Vijay Sethupathi came and i talked about him about the financial loss the film facing because of rain, that too in an expensive place like that. Vijay Sethupathy calmly said “we cannot blame rain for this, it will be good if we eat Bhajji at this climate”. At that kind of situation he seen very relaxed and believed in me” said Gokul, the director.

Previous articleVirat Kohli Says Who Has The Best “Beard” In Indian Team !! His Answer Will Win the Hearts Of Every Dhoni Fan !!
Next articleGirl Gang Raped & Thrown By The Rapists !! She Traveled 75 Kilometers To Do This !!

Nearly a thousand women students protested on Thursday midnight at SRM, Kattankulathur after a student alleged that a man who works on the campus...