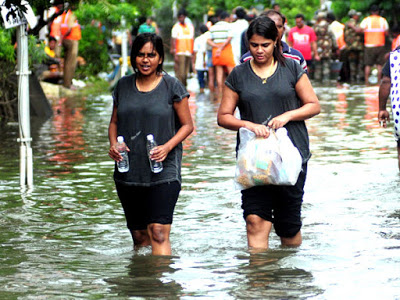 When the floods ravaged Chennai, volunteers eagerly came forward to help out with the relief works, men and women alike. Only it wasn’t quite so alike. The women volunteers, in their zeal to provide help in rescue and relief work provided their numbers for anybody who needed help. They never thought that in times of such calamity too, there would be men who would misuse it to call them up and harass them with lewd and sexual messages. It came as a shock to these women to be receiving calls from perverts.
When Poornima (name changed) began to collect relief material in Bangalore, she gave out her contact number. Little did she know that she would be harassed by a rogue.”He initially promised to contribute 500 loaves of bread and then brought it down to 100. When I told him he could drop the supplies in Koramangala, he called to say he was in the area, asking me if I wanted to have tea,” said Poornima in an interview with TOI. Although the man, who identified himself as Azhagu, didn’t donate even one loaf, he continued to flood her inbox with messages.

The News Minute reported of how one woman, Pragya (name changed) had provided her number for flood relief coordination. “She had posted her contact details online, and that is how the man got through to her. When she asked the guy what she could do to help him, he responded by saying that she could “do anything to him”,” reported the article.
Pragya’s friend who shared her post on Facebook, later wrote that they had approached the police. The screenshots were later taken down from the social networking site after the harasser apparently apologised.
Meanwhile, although many other avenues of essential supplies were shut, the Tamil Nadu state government kept the TASMAC or state-run liquor shops open even if they functioned by candlelight. As a result, women volunteers reported of inebriated persons in the relief camps harassing them on social media.
Dhivya Balachandar, a civil engineer and one of the administrators of the popular Facebook page Tamilnadu Flood – Support, said some of the women have begun receiving friend requests and messages that are unrelated to relief activity. “They start off saying that they are like brothers to the women or thank them for their help and then, they want to be friends. Then, they send messages or ask questions that have nothing to do with the work we are doing,” she said.
In reply to Balachandar’s post about this on the page, one woman has shared a screenshot of messages she received from a man asking what she was doing and then messaging repeatedly when she doesn’t reply.
Divya T., a volunteer from Bengaluru, said she had accepted numerous friendship requests on Facebook, as this was used as a means of communication.
“One man kept messaging and telling me he was scared. I asked him what the matter was, and he said he was feeding a calf. He messaged throughout the night and I ignored him. The next day, it escalated: he said he was alone in a room full of water but when I tried to find out where, or get his number to organise help, he would say he did not know. Then, he said to “consider him a brother” and kept trying to send me a picture. It was awful,” she said.
On Twitter, one woman shared her experience about a man she had gone to check on calling her to ask if they could go out sometime. She added that other women she knows too had been getting weird calls.
Kav Ya, a Facebook user posted on Monday: “Girls, if there are cases of men harassing women through phones, taking advantage of the numbers shared by them for flood relief posts, please let me know. I can get it sorted with the help of a few senior cops…”
Courtesy : iDiva