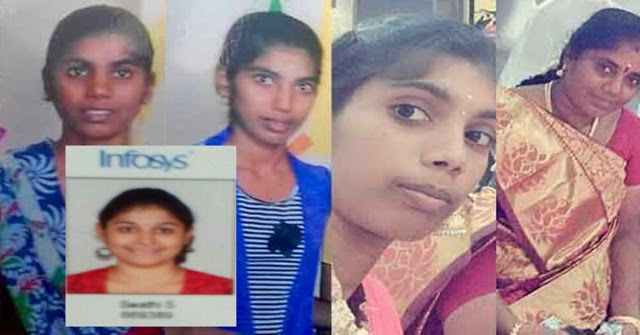 As reported by Vikatan today, a very shocking news has come
out, shaking the Chennai city.

Less than 24 hours’ time, 6 girls in Chennai have been
murdered brutally. 4 girls from Royapettah, 1 girl from Nungambakkam and 1 girl
from Mogappair have been murdered next to next within 24 hours.
Chinnarasu, a sweet shop employee from Royapettah has three
daughters – Parimala (19), Pavithre (18) and Sneha (16). As his first wife
passed away, he remarried Santhana Veena (36). Parimala and Pavithra were studying
first year in a private college and Sneha was a 12th std student. Last week,
all of them had gone to their native place – Karaikudi. Right from last Monday, their house been locked up. And on
Friday, the neighbours started getting an unusual smell from the locked house.
They immediately informed the Royapettah police station.
When the police broke the lock and entered the house, the second wife and all the three
daughters were naked and lying in different corners. Their bodies were in
stages of decay.
The police caught hold of Chinnarasu and brought him for
investigation.  On questioning, they came
to know that the murders were done by Chinnarasu. On doubting the second wife’s
behaviour, these murders have been committed it seems.
The police doubt Chinnarasu to be psychologically affected
as he has made his own family naked and murdered them. The police are doing
further investigation regarding the same.
On top of this, a girl working in an IT firm from
Nungambakkam and a girl from Mogappair were also brutally murdered.
Investigations are going on.
These news have definitely left the city in huge shock.
Chennai being one of the safest cities for girls, is turning out to be
otherwise. Should we girls start being
afraid of living in our own city hereafter??
Previous articleShocking: India Lost Over Rs.4,000,000,000,000 /- Within Few Minutes In The Morning Due To Brexit Effect
Next articleWhy Was Her Body Lying On The Ground For More Than 3 Hours? – Swathi’s Family Members Question The Police