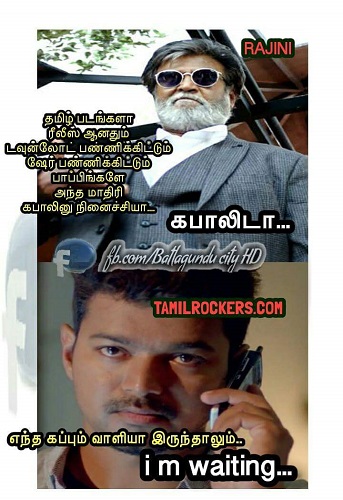 Despite taking steps to protect the film against piracy and leaks, Rajinikanth-starrer ‘Kabali’ may have been leaked on to the Dark Web ahead of its release on July 22.
Claiming that several links on the Dark Web were being provided to watch the film, the Hindustan Times reported that the film’s makers are trying their best to pull down all links and copies of the film while urging Rajini fans not to watch the film online.
HT also spoke to Censor Board chief Pahlaj Nihalani, who said “They have not spared Rajinikanth either! Kabali was censored in Chennai, so it had nothing to do with our office in Mumbai. Earlier there was Salman Khan’s Sultan. I don’t think collections of films with iconic stars will get affected by the leakage. It is the smaller films featuring non-A-listers which get hit by the leakage. Great Grand Masti is a case in point.”
This reported leak comes after producer S Thanu obtained an injunction order from the Madras High Court restraining more than 169 websites from indulging in online piracy and infringement of copyright.
The Indian Express earlier reported:

The writ petition requested the court to direct Telecom Regulatory Authority of India (TRAI) to issue instructions to all service providers to block websites offering illegal download of the film. The petition claimed that more than 70 percent of total revenue generated online was garnered by illegal downloads of films, music and pornography. Only 30% was paid for by people using for legal purposes on legal means.

Meanwhile, an online portal for pirated South Indian films, Tamilrockers has sparked a war on social media after Thanu went to court. In a post, Tamilrockers assured its loyal users that they will upload Rajinikanth’s latest blockbuster on July 21, the day before it is due to hit theatres.

Together with the hashtag ‘I support Tamil rockers’ social media users posted memes trolling the film’s makers for blocking piracy. The source is yet to cofirmed but this is causing lot of trends & waves across the FB and Twitter.. Time to stop the piracy ASAP and let the movie release peacefully!